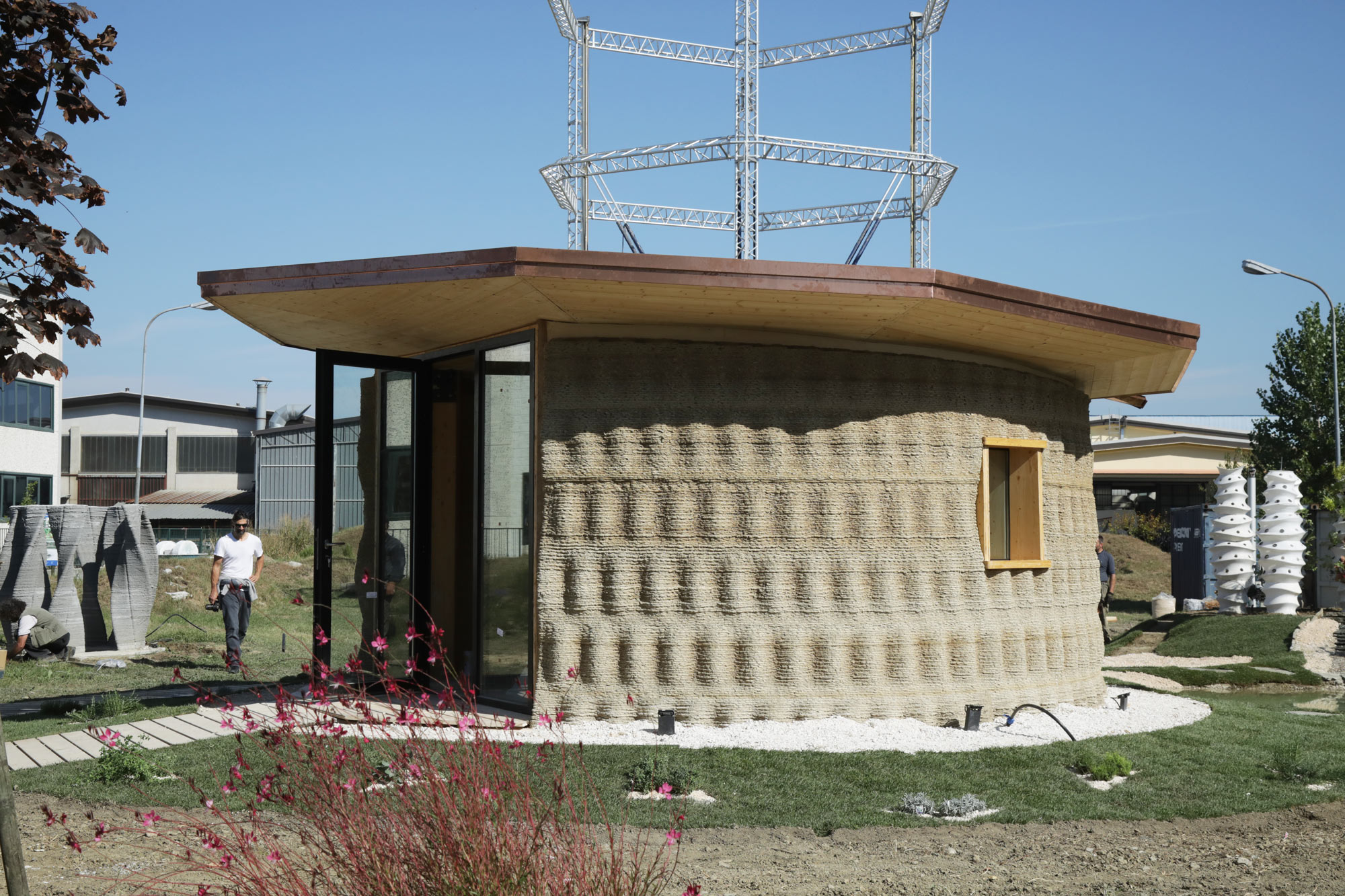 On the occasion of the “Viaggio a Shamballa” event and the “A call to save the world” conference, WASP presents Gaia, a case study of 3D printed construction using the new Crane WASP technology with natural materials from the surrounding area. The Italian company’s commitment, since its origins in 2012, has been constantly aimed to the development of equipment for additive manufacturing on an architectural scale and the inauguration of Gaia represents an important milestone, also in light of all the researches conducted in the 3D printing field, in the design and materials study, researches that, in 2015, have allowed the realization of the 12 meters Big Delta WASP 12.

Gaia, whose name is due to the use of raw soil as the main binder of the constituent mixture, can be considered a new eco-sustainable architectural model with particular attention to the use of natural waste materials, coming from the rice production chain and oriented to the construction of particularly efficient masonry from a bioclimatic and healthy point of view. This research was also possible thanks to the collaboration with RiceHouse.

For the realization of Gaia, RiceHouse supplied the vegetable fibers through which WASP has developed a compound composed of 25% of soil taken from the site (30% clay, 40% silt and 30% sand), 40% from straw chopped rice, 25% rice husk and 10% hydraulic lime. The mixture has been mixed through the use of a muller, able to make the mixture homogeneous and workable.

Gaia is a highly performing module both in terms of energy and indoor health, with an almost zero environmental impact. Printed in a few weeks thanks to its masonry, it does not need heating or an air conditioning system, as it maintains a mild and comfortable temperature inside both in winter and in summer. The bioclimatic project by RiceHouse takes advantages of the passive contribution of the sun thanks to its South West orientation where a large window is positioned to optimize natural light, but in particular is centered in the stratigraphy both in the roof, made of wood with an insulation in lime+chaff (RH300), both in the lime+chaff screed, light but thermal that allow to reach an energy requirement equal to a class A4. The monolithic wall printed in 3D was then finished internally with a shaving clay-lamina (RH400), smoothed and oiled with linseed oils.

Tiziana Monterisi (RiceHouse’s CEO): “Gaia was made exclusively with natural materials such as raw soil, shredded straw, husk, and wood and is highly performing from an energy and environmental point of view”.

The external casing, completely 3D printed on site through the Crane WASP, has been designed with the aim of integrating natural ventilation systems and thermo-acoustic insulation systems in  only one solution. The deposition of the material based on raw earth, straw and rice husk is controlled through articulated weaves able to confer at the same time constructive solidity and geometric variation along the entire wall development. The versatility of the computational design is in fact made possible in the construction practice thanks to the precision and speed of the 3D technology, obtaining complex geometries, difficult to replicate with the traditional construction systems.  It took 10 days for the realization of the 3d printed casing, for a total of 30 square meters of wall whose thickness is 40 cm and the total cost of the materials used is € 900.

On the basis of the data experimented with Gaia, it is possible to concretly conceive new economic scenarios in which one hectare of cultivated paddy field can become 100 square meters of built area.

Gaia experience offers the opportunity to divulge the multiple potential that 3D printing can express thanks to the world agricultural resources, guaranteeing a minimum environmental impact in addition to infinite design solutions, essential in a new living frontier vision.