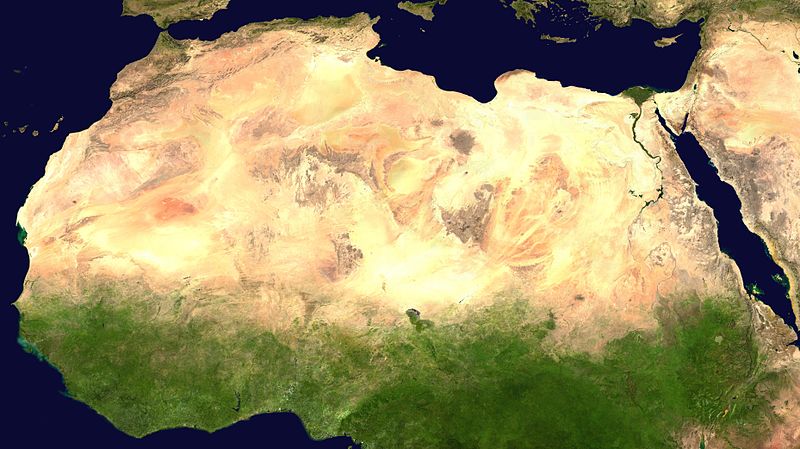 The world has an abundance of deserts, sunlight, saltwater and CO2 and a shortage of arable land, food , clean energy, fresh water and clean air. Finding ways to use what is abundant to produce that which is scarce is the big challenge of the 21st century. In a world of decreasing freshwater resources and increasing desertification scientists and engineers are looking for ways to exploit abundant salt water resources.

In the image below elements of the project are identified as follows: 1. Concentrated Solar Power; 2. Saltwater greenhouses; 3. Outside vegetation and evaporative hedges; 4. Photovoltaic Solar Power; 5. Salt production; 6. Halophytes; 7. Algae production.

The Sahara Forest Project (SFP), presented at the UN Climate Negotiations in Copenhagen, was received with some skepticism.  In the intervening time the SFP has created a pilot research facility in Qatar that is making promising strides. The pilot facility contains 10,000 square meters of integrated environmental technologies.

One innovation includes capturing waste heat from concentrated solar power (CSP) and combining it with saltwater to produce evaporated moist cool air that allows vegetables and salad crops to flourish. Excess moisture from the cooling system is extracted and piped to the plants as irrigation.  This is one of the first projects in the world to co-locate CSP and re-vegetated areas.

Researchers are experimenting with a combination of ETFE a fluorine-based plastic and polythene roof coverings to see which provides a higher yield.  This cooling process minimizes the projects carbon footprint.

A second innovation is the desalination technology. Water being piped to the project has about 15% salinity and the brine is passed over external vertical evaporators organized in an array to create sheltered and humid environments. These areas provide beneficial growing conditions for food, crops and some desert plant species which are grown and identified and become candidates for grazing fodder and bioenergy feedstock.

Third, halophytes, or salt-loving plant species, are cultivated in seawater. These plants generally grow well in desert conditions and are also promising sources of animal fodder and bioenergy feed stocks.

Finally research on commercial level state of the art algae, native to the golf and Red Sea, production is being undertaken at SFP and products including nutraceuticals, biofuels, and animal and fish fodder are being produced.

According to Kjetil Stake, Managing Director of SFP, it is critical that large industrial players from around the world bring their best technologies to this project in order for it to succeed. SFP leaders are clearly looking to the future and believe there are many leading companies around the world who are looking to the future as well.  Optimizing technology will allow SFP to expand the project to a much larger scale.