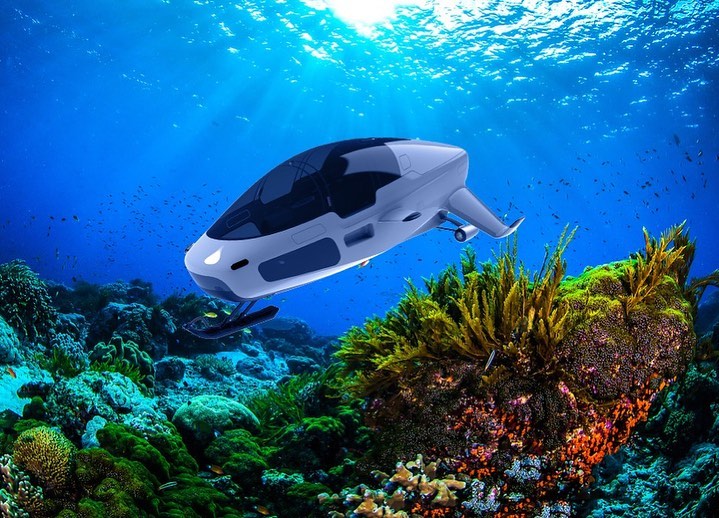 The Italian startup iSpace2o has built a futuristic sea vehicle that is a hybrid of a jet ski and a submarine, capable of carrying up to four people inside a dry, comfortable, pressurized cockpit. Called the DeepSeaker DS1, the fully electric submersible is totally independent, launching from standard marinas and docks. The potential use-case scenarios are search and rescue, leisure, and tourism.

The submersible is made from a steel framework, while the cockpit is made of strong, lightweight carbon and thermoplastic. In the event of a forceful collision, the cockpit will remain in one piece as it’s separate from the rest of the body, detaching from it. Then, a perimeter airbag fixed on the outer shell of the cockpit inflates automatically for rapid ascent to the surface.

As a vehicle, DeepSeaker DS1 can reach a surface speed of up to 25 knots (46 km/h) and dive to depths of up to 50 meters (164 ft), using two electric propulsion jets. iSpace2o engineers say the jets are completely silent and free of vibrations, made by Sealence, also an Italian company.

In the cabin, passengers will enjoy fresh air supplied from a container and a CO2 level alarm to warn in cases of dangerous build-up. Moreover, there are emergency air canisters for four occupants, seat belts, GPS, a 3D depth sounder, a heads-up display with useful information, and many other features.

Regarding how close DeepSeaker DS1 is to become widely available, iSpace2o isn’t quite there yet. However, the firm has presented the first prototypes, and ten units have been sold to a large cruises firm that will make them available to passengers on their ships. Those people will be given the amazing opportunity to explore the wonders of the seabed on the majestic places they visit, and do so from the safety and comfort of DeepSeaker’s cabin.