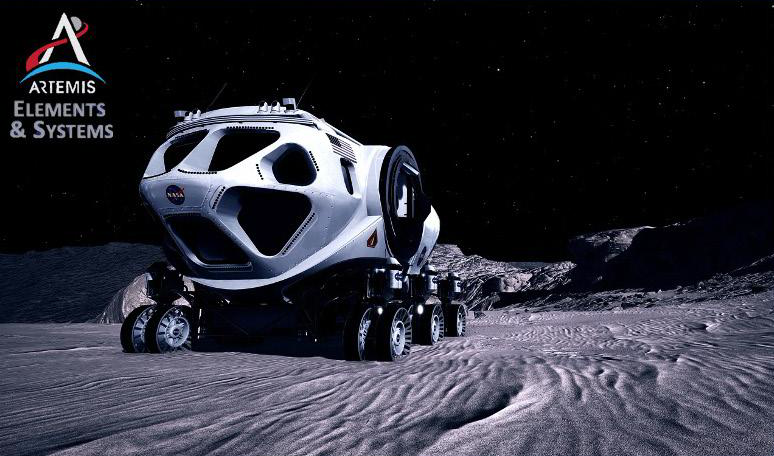 NASA’s Artemis program, which aspires to bring humans back to the Moon by 2025, is well underway, and the first launch is planned for August 2022. The program includes many phases extending as far as 2033, and lunar rovers will be indispensable at some point. NASA has already called for proposals, and several vehicle manufacturing experts have already answered the call.

Designing a lunar rover able to carry passengers and cargo is very challenging. Engineers have to consider the freezing temperatures on the Moon, the vastly different gravity level, the extremely demanding energy autonomy requirements, and the terrain difficulties.

The first proposal comes from the joint venture of Lockheed Martin and General Motors, and it’s a pod-shaped electric vehicle with a removable shell. The rover can seat two astronauts in the front, and it has plenty of additional room in the back.

The second proposal is that of Northrop Grumman and several partners, like AVL, the propulsion systems expert, Lunar Outpost, who has designed successful rovers in the past, and Michelin, who will contribute an airless tire. Northrop Grumman will develop the vehicle platform, energy management, sensors, controls, avionics, and navigation.

The third proposal combines the expertise of Toyota and JAXA, Japan’s space agency. The rover they envision is called the Cruiser, and it’s larger than the other proposals, capable of ranges of up to 10,000 kilometers (6,200 miles).

The fourth proposal also involves JAXA, but in collaboration with Nissan this time. The two have developed a smaller rover with an advanced all-wheel-drive technology that will make navigating unpredictable terrain easy and reliable.

NASA hasn’t selected any of the proposals yet, and it isn’t certain that the agency will be limited to one option, considering the complexity and duration of the Artemis program.