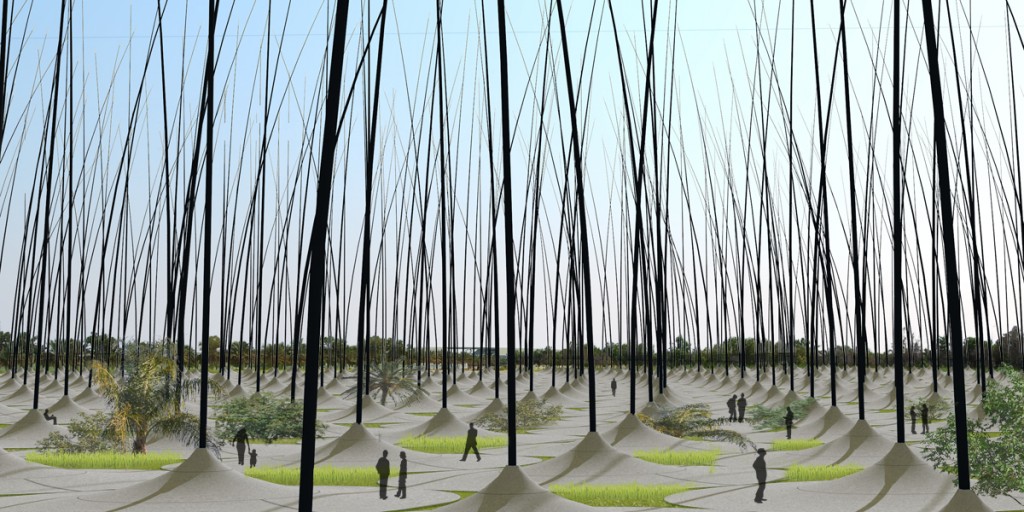 Engineers and designers often look to nature for ideas on how to solve technical issues.  There is a caveat: over design in nature often leads to extinction and over design in engineering can lead to the same outcome. The KISS principle, “Keep it Simple Stupid” or “Keep it Super Simple” coined by Kelly Johnson, a lead engineer at the Lockhead Skunk Works, designers of the U-2 and SR-71 spy planes, states that “systems work most efficiently if they are kept simple rather than made complex”.

Recently a New York company, Atelier DNA, won a “Land Art Generator” design award for Windstalks in which a simple design taken from nature, specifically a field of wheat reeds in a marsh, produces significant amounts of renewable energy.

Revolving blades go back at least as far as Rembrandt, the Dutch genius who painted beside rotating blades turning milling stones to grind wheat.  Windstalks was the result of “trying to find kinetic models in nature that could be tapped to produce energy,” said Atelier DNA founding partner Darío Núñez-Ameni. The proposed design calls for 1,203 “stalks,” each 180-feet high with concrete bases that are between 33 and 66-feet wide. The carbon-fiber stalks, reinforced with resin, are about a foot wide at the base tapering to 2 inches at the top. Each stalk contains alternating layers of electrodes and ceramic discs made from piezoelectric material that generates a current when put under pressure. In the case of the stalks, the discs compress as they sway in the wind, creating a charge.

Windstalk wind farm will span 280,000 square feet. Based on rough estimates, said Núñez-Ameni the output would be comparable to that of a conventional wind farm covering the same area. “Our system is very efficient in that there is no friction loss associated with more mechanical systems such as conventional wind turbines.”

Each base is slightly different, and is sloped so that rain will funnel into the areas between the concrete to help plants grow wild. These bases form a sort of public park space and serve a technological purpose. Each one contains a torque generator that converts the kinetic energy from the stalk into energy using shock absorber cylinders similar to the kind being developed by Cambridge, Massachusetts-based Levant Power .

Perhaps more amazing is the idea to use the Windstalks concept underwater to harness energy from the flow of ocean currents, waves and tides.