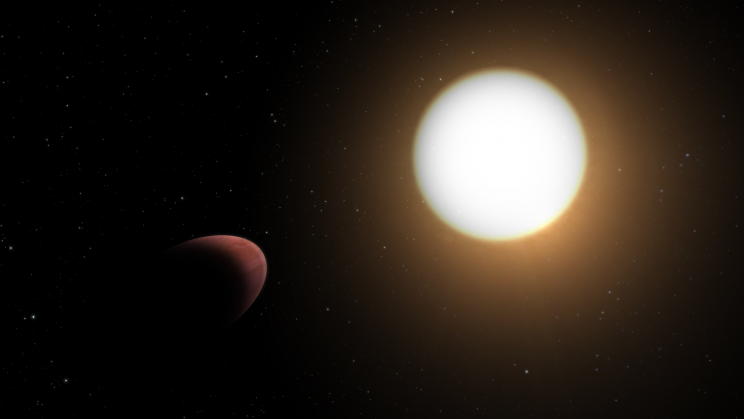 In a groundbreaking new study, astronomers have discovered an exoplanet that looks more like a rugby ball than a sphere.

The planet called WASP-103b is almost twice the size of Jupiter. The planet is about 1,225 light-years from Earth and is in the Hercules constellation. It orbits its host star WASP-103, which is about 200 degrees hotter than our Sun and is 1.7 times larger.

The strange shape of WASP-103b is due to the planet being stretched by the gravitational forces of its parent star.

Researchers discovered that as this exoplanet orbits so close to its sun, it resulted in the deformation of its shape. In other words, the intense tidal forces of the host star moved the solid ground of the exoplanet. These tidal forces are similar to the tides the moon induces in our oceans on Earth, but they are much more intense.

Drake Deming, an astronomy professor at the University of Maryland, said, “This planet is a prototype for ultra-hot Jupiters,” “These planets are so heavily irradiated by their host stars, they’re almost like stars themselves.”

Susana Barros, the lead author of the paper, said, “The resistance of a material to being deformed depends on its composition,”

“For example, here on Earth we have tides due to the Moon and the Sun but we can only see tides in the oceans. The rocky part doesn’t move that much. By measuring how much the planet is deformed we can tell how much of it is rocky, gaseous, or water.”