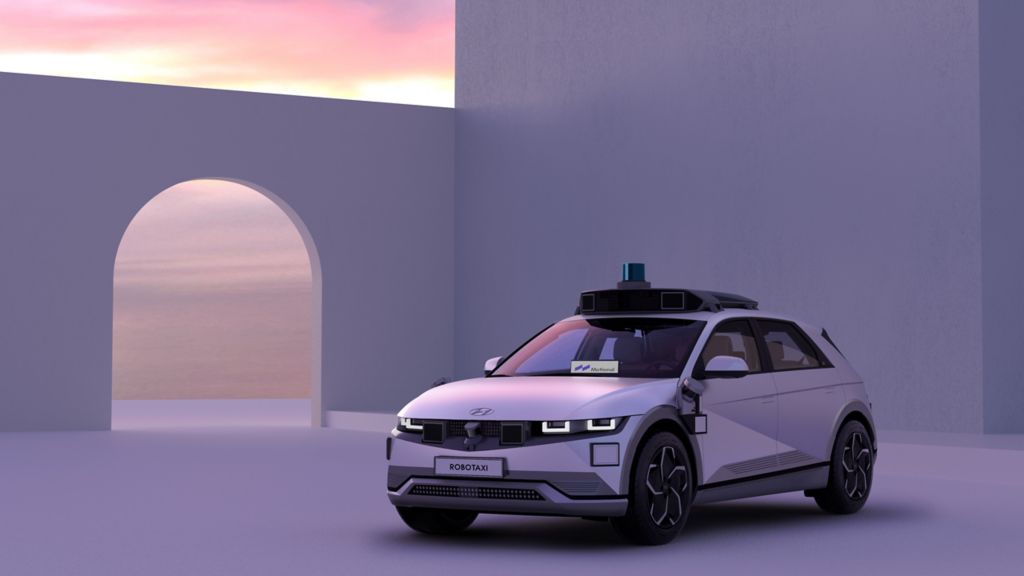 Hyundai has presented a special “robotaxi” version of the Ioniq 5, its fully electric SUV that is planned for market launch in the next months, and the South Koreans promise that this isn’t just a marketing stunt. Rather, it is the fruit of their collaboration with ‘Motional’, a driverless tech firm that was founded last year by Hyundai and Apriv, to develop a self-driving system that could be fitted onto any model of the firm.

This special edition of the Ioniq 5 features Motional’s systems like a very obvious LiDAR unit on the ceiling and a set of over 30 sensors and cameras that monitor everything that goes on around 360 degrees and at a distance of up to 300 meters. Motional states the sensor arrays are shown intentionally to make the car stand out for what it really is.

In terms of autonomous driving capabilities, it reaches level-4, which means it can drive itself in all situations except for unusual scenarios such as floods or road construction. Motional has foreseen a system of remote control for these rare occurrences, so a human driver will be able to assume control if needed. The robotaxi also features a steering wheel and pedals, so it could be driven by a local chauffeur too, but this is a last-resort ancillary.

The actual robotaxi service is expected to debut in the United States in 2023, and Lyft is going to operate Motional’s Ioniq 5 fleet. The South Koreans claim to have conducted thousands of autonomous trips in Las Vegas, so their systems have been adequately prepared for the particular market.

The Ioniq 5 features 300 miles of range and its batteries can charge at 220kW, replenishing them from 10% to 80% in just 18 minutes. This makes the robotaxi good enough for the purpose. Finally, its lushy interior isn’t something that would go unnoticed by Lyft passengers.

IKO Arm is a Lego-Prosthetic Arm for Kids That Makes Missing a Limb Cool!
Where Linear Actuators are Used the Most