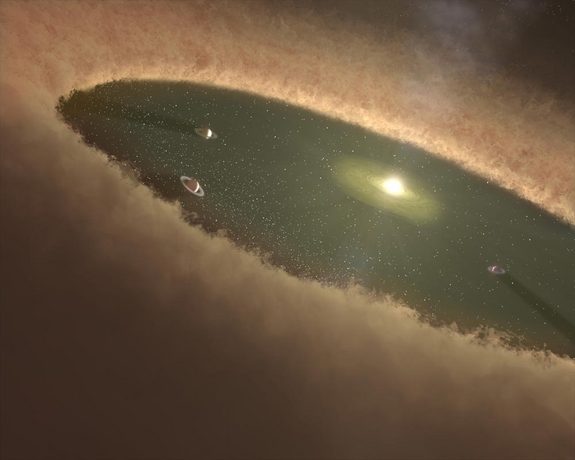 Artist’s illustration of planets forming in a circumstellar disk like the one surrounding the star LkCa 15. Credit: NASA/JPL-Caltech

Scientists from Australia and the United States have observed a gas-giant planet – a giant planet composed mainly of hydrogen and helium – being formed for the first time.

They also captured photographs of an exoplanet or extrasolar planet – a planet that orbits a star other than the sun – forming around a young star called LkCa 15. LkCa 15 is located 450 light years from Earth and is surrounded by a vast disc of dust and gas, making a perfect environment for planets to grow.

Catching a planet in the making is an exciting first for astronomers. Although nearly 1,900 planets have been discovered and confirmed outside our solar system, none of them are in the process of formation.

Kate Follett, a researcher at Stanford University, said that “no one has successfully and unambiguously detected a forming planet before. There have always been alternative explanations, but in this case, we’ve taken a direct picture, and it’s hard to dispute that.”

This remarkable feat was achieved by scientists with the help of specialized instruments. These instruments include the Large Binocular Telescope or LBT, the world’s largest telescope, located on Arizona’s Mount Graham, and the University of Arizona’s Magellan Telescope and its Adaptive Optics System, MagAO, located in Chile.