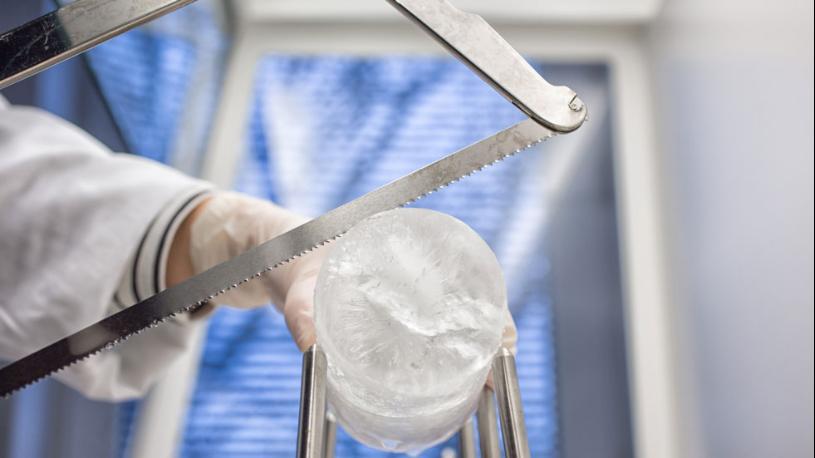 An AWI scientist is preparing an Arctic sea ice core for a microplastic analysis in a lab at the AWI Helgoland. Image courtesy Alfred-Wegener-Institut/Tristan Vankann

Plastic pollution in the Arctic region has reached new heights. A study from researchers at the Alfred Wegener Institute (AWI) in Germany found an unprecedented number of plastic fragments, measuring from a few micrometers to under five millimeters in size, frozen in Arctic sea ice.

Scientists gathered ice samples from five distinct regions of the Arctic Ocean during three Arctic expeditions carried out in 2014 and 2015.

To analyze these samples, Fourier transform infrared spectroscopy was used. This spectrometer helped the scientists to evaluate the concentration and size of plastic particles, and also to identify the types of plastic that were present.

The samples contained up to 12,000 microplastic particles per liter of ice (about 0.26 gallon), which is a record-breaking amount. Scientists uncovered 17 different kinds of plastic, including paints and packaging materials. According to researchers, the amount of plastic found is about two to three times higher than what has been measured in the past.

Ilka Peeken, a biologist at AWI, said, “During our work, we realized that more than half of the microplastic particles trapped in the ice were less than a twentieth of a millimeter wide, which means they could easily be ingested by Arctic microorganisms like ciliates, but also by copepods.”

“No one can say for certain how harmful these tiny plastic particles are for marine life, or ultimately also for human beings.”