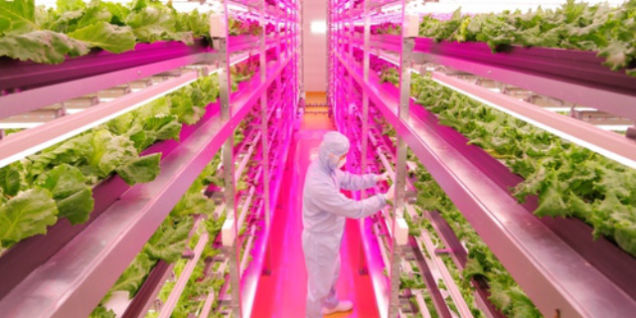 Humans have spent thousands of years mastering agriculture. But a deficient rainfall, bad storm or drought can still lead to the loss of a well-planted harvest.

But not anymore, says Japanese plant physiologist Shigeharu Shimamura, who has turned a former Sony Corporation semiconductor factory into the world’s largest indoor agriculture farm that can grow 10,000 heads of lettuce every day.

The plant in Miyagi Prefecture in eastern Japan was badly hit by a tsunami in 2011. Now, it is growing massive amounts of food by using special LED fixtures that are developed by GE and emit an optimal amount of light to accelerate the growing process and produce the best quality crop. The LED lights help to produce lettuce 2.5 times faster with just 1% of water as compared to a traditional farm.

This 25,000 square feet farm is nearly half the size of a football field. High end technology is used to control the humidity level, temperature, carbon dioxide levels and the irrigation in the plant growing stacks.

These LED fixtures are a key part of this project

There are around 17,500 LED lights across 18 plant cultivation racks that are stacked 16 levels high in this indoor farm.

The LED lights are specially designed to fit into small plant racks and withstand the high humidity environment. Uniform lighting is ensured to all of the plants.

On average, a traditional farm throws away 50% of its lettuce because of the low quality. But in this farm, only 10% of produce is wasted. LEDs save energy, as they are more energy efficient than fluorescent lights.