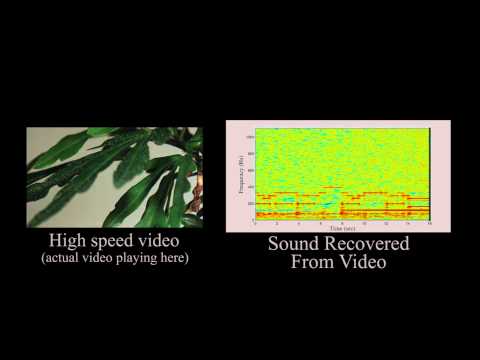 It is said that the walls have ears, but soon it may be possible to say this for everyday objects like a potato chip bag, a glass of water or a potted plant.

A team of researchers from the Massachusetts Institute of Technology (MIT), working with Microsoft and Adobe, have found a way to recover sound by monitoring video of microscopic movements made by almost any inanimate object.

The idea is that someone speaking in a room creates a vibration in the air. These vibrations are tiny, but they are large enough to disturb any inanimate object.

The team was able to record the tiniest movements made by a potted plant and convert it back into the sound that created it. They successfully extracted the recording of “Mary Had a Little Lamb,” which was played alongside a potted plant, by analyzing high-speed video of that potted plant.

The team was also able to pick up a conversation by training a camera on a potato chip bag from the other side of a soundproof glass door.

The technology is similar to the laser microphones used by spy agencies to eavesdrop on conversations. But here, instead of using some high-end expensive microphones, the researchers were able to retrieve audio from a high-speed video.

This technology may be useful in retrieving audio from silent CCTV footage to help solve crimes.