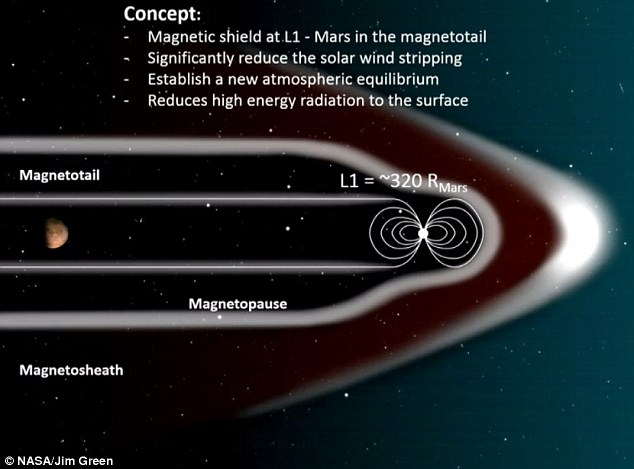 Although at present Mars is very cold, dry, and has a very thin atmosphere, it was not always like this. As per scientists, Mars was once blessed with a habitable climate and thick atmosphere that could have allowed liquid water to exist.

NASA is now trying to give Mars its atmosphere back for colonizing the planet in the future!

In a presentation at the Planetary Science Vision 2050 Workshop in Washington DC, NASA scientists have proposed that deploying a giant magnetic shield into space between Mars and the sun could protect its atmosphere from solar wind. They consider that the launched magnetic shield could serve as a replacement for Mars’s own lost magnetosphere.

The researchers explained, “This situation then eliminates many of the solar wind erosion processes that occur with the planet’s ionosphere and upper atmosphere allowing the Martian atmosphere to grow in pressure and temperature over time. Much like Earth, an enhanced atmosphere would: allow larger landed mass of equipment to the surface, shield against most cosmic and solar particle radiation, extend the ability for oxygen extraction, and provide ‘open air’ green-houses to exist for plant production, just to name a few.”

It is a great concept, and in case scientists are successful in deploying a giant magnetic shield, then the dream of colonization on Mars would not be far away.