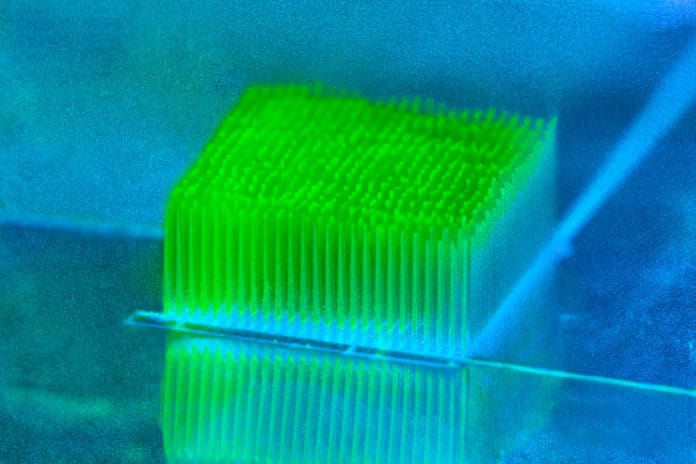 Researchers from the University of Cambridge have made 3D-printed tiny ‘skyscrapers’ for the communities of photosynthetic bacteria. These bacteria will generate electricity using sunlight, carbon dioxide and water.

These tiny grids of high-rise ‘nano-housing’ creates perfect environment for these sun-loving bacteria to grow quickly.

The photosynthetic bacteria or cyanobacteria, also known as blue-green algae, can be found in all types of water. These bacteria require lots of sunlight to grow. By providing appropriate environment for the growths of these bacteria, scientists want to take their energy-harvesting potential to new heights.

For extracting the energy bacteria produce through photosynthesis, they need to be attached to electrodes. But these electrodes also encourage the growth of the bacteria.

“There’s been a bottleneck in terms of how much energy you can actually extract from photosynthetic systems, but no one understood where the bottleneck was,” said Dr Jenny Zhang, who led the research. “Most scientists assumed that the bottleneck was on the biological side, in the bacteria, but we’ve found that a substantial bottleneck is actually on the material side.”

Scientists 3D-printed electrodes out of metal oxide nanoparticles. Like a tiny city, these electrodes were set in densely packed sets of pillars. As a result, cyanobacteria got the appropriate environment. And the team found the more efficient way of generating electricity than other current bioenergy technologies, such as biofuels.

“I was surprised we were able to achieve the numbers we did – similar numbers have been predicted for many years, but this is the first time that these numbers have been shown experimentally,” said Zhang. “Cyanobacteria are versatile chemical factories. Our approach allows us to tap into their energy conversion pathway at an early point, which helps us understand how they carry out energy conversion so we can use their natural pathways for renewable fuel or chemical generation.”