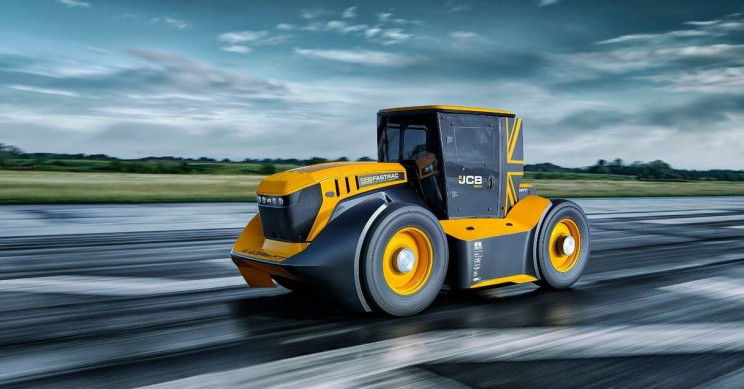 A modified JCB Fastrac has stormed into Guinness World Records after being crowned the world’s fastest tractor. It sets a new world tractor speed record of 135.191mph (218kph), which was the average of two high-speed runs. The Fastrac secured the title at Elvington Airfield in UK with motorbike racer Guy Martin at the driver’s seat.

In June 2019, JCB’s ‘Fastrac One’ set its first Guinness World Record for the fastest tractor at Elvington with the recorded speed of 103.6mph (167kph). With the ambitious plan to break its own record, now the company is back with a newer version ‘Fastrac Two’ that managed to hit 241.4 km/h (150 mph) during the Guinness run.

JCB Chairman Lord Bamford said, “When we reached 103.6mph with the Fastrac in the summer, I was convinced we could go even faster, and the JCB team has risen to the challenge by setting this new record. It’s an amazing achievement delivered by a young and enthusiastic engineering team,”

Although both the versions maintained the same design principles, but new version is 10% lighter than its predecessor.  Moreover Fastrac Two is more streamlined than the earlier one.

Tim Burnhope, JCB’s Chief Innovation & Growth Officer, said, “The Fastrac’s advanced split-type air/hydraulic braking system was uprated with different brake pads and discs, but still using the tractor’s standard callipers. We also added a parachute on this version as an extra level of safety. Fortunately, we didn’t need to deploy it as all our engineering calculations meant that Guy Martin could comfortably stop the tractor from speed, after each run,”