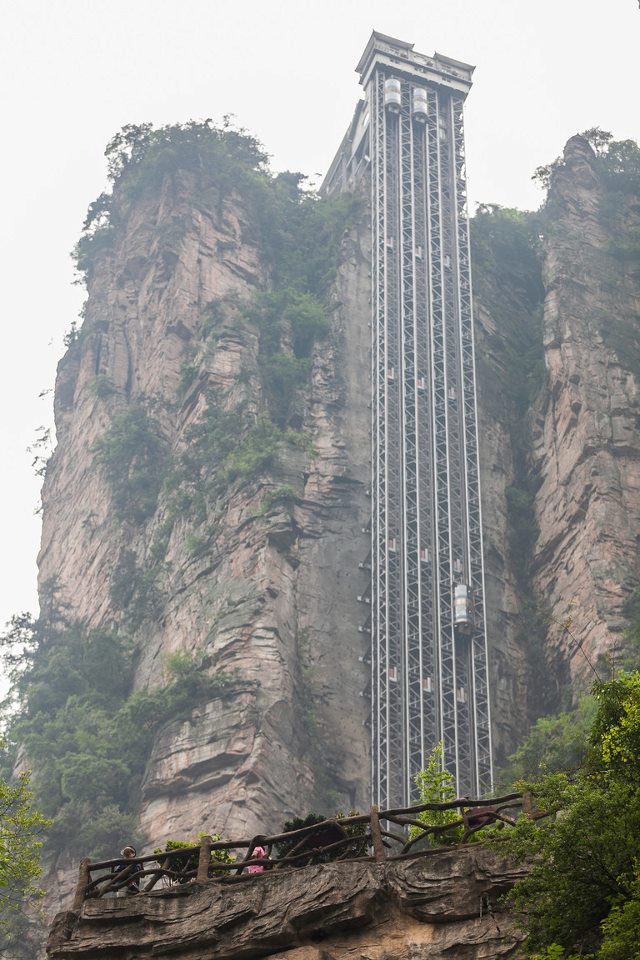 Bailong Elevator, also known as the Hundred Dragons Elevator, is a glass elevator built into the side of a rocky mountain range full of thousands of sandstone columns that rise up thousands of feet in the Wulingyuan area of Zhangijiajie, Hunan Province, China.  At 1,070 feet (330m) high, construction of the elevator, started in 1999 and was completed in 2002.  The project encountered intense opposition from environmental groups who cited the World Heritage Site designation as the main reason for their disagreement.  The total investment for the project was 120million yuan, about $20 million.

To build the Hundred Dragon Elevator, tunnels and shafts had to be dug into the quartz sandstone column carefully chosen to house the elevator.   With five million visitors to the region each year the area was already suffering from excessive tourism but work went on. The project has seen its share of setbacks.  After the project was opened to the public in 2002 it was soon temporarily shut down to address safety concerns

The project was an achievement of a team of many dozens of mostly Chinese contractors and suppliers. For example, Qinhuangdao Photelectric  provided the elevator load weighing control system, VIC card management, energy saving devices, an earthquake detector, and the entrance detectors for the elevator.  controllers to provide accurate weighing of the elevators and their passengers.