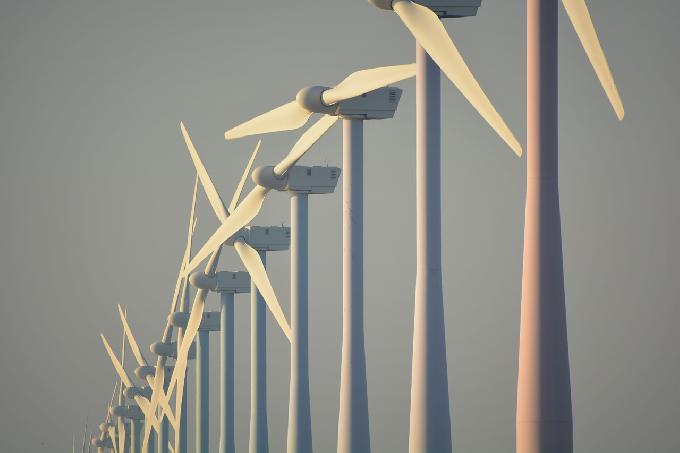 Photo by Ben_Kerckx / CC BY

Greater Gabbard Wind Farm, completed in 2012 on shallow sandbanks 14 miles off the coast of Suffolk, England, in the North Sea, boasts 140 turbines and produces 504 MW of power a year, making it the largest offshore wind farm in the world.

Greater Gabbard cost $2.4 billion; the project application was submitted in 2005 and received approval in 2007. Construction started in 2009 with the building of foundations.  Originally a joint venture between Airtricity and Fluor, the project was purchased by Scottish and Southern Energy in 2008.

Monopiles are the most common foundation used for offshore wind farms and as wind farms move further and further offshore length and diameters are increasing significantly. A powerful heavy lift crane on board a SeaJack, a self-propelled jack-up vessel, is needed to handle the projects huge steel tubes.

Greater Gabbard monopiles are 203 feet and weight 6 tons.  A 230 ton transition piece connects the turbine with the monopile. A total of 36,000 tons of transition pieces were required for the project.

Specialized knowledge and experience is required to upend and lift steel tubes into place. A2Sea, the creator of SeaJack, designs and installs the deck spread and self-fastening so that monopiles are stowed safely onboard before they are transported to offshore sites.

Turbines can be installed in a variety of configurations including one and two piece towers, full rotor lifts, “bunny ears” configuration, nacelle lifts with single blades and more. Each of these configurations requires different operational techniques.

Moving components from a manufacturing location to the offshore installation area i is a logistical challenge. Marine coordination services are required to choreograph the work of many teams.

As the industry evolves new techniques and designs are constantly being developed. With billions in onshore and offshore wind power projects on the drawing board this relatively new industry is beginning to hit its stride.