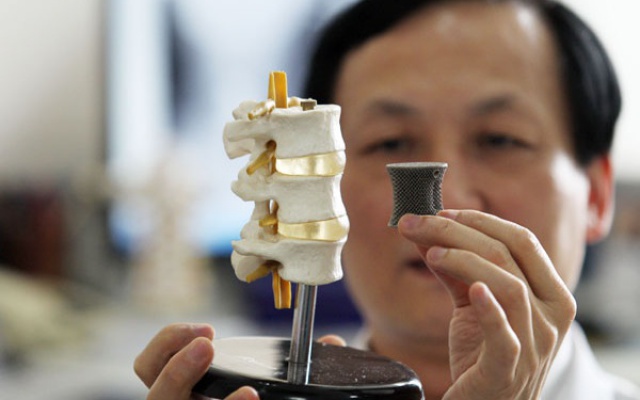 A number of miraculous uses of 3D printed implants is revolutionizing the way people recover from accidents and deal with congenital abnormalities.

At Peking University’s Third Hospital, a titanium implant, which has been designed to fit the anatomical structure of a pelvis and the creation of customized vertebrae to replace damaged human counterparts, are just two examples of the many huge breakthroughs now occurring in medicine.

In the following video, a 12-year-old boy cracked a vertebrae while “heading” a soccer ball (football). When doctors examined his vertebrae they found it to be cancerous and decided to replace it with a 3-D printed version. During a five hour orthopedic spine surgery, the first 3D printed vertebrae was implanted.

Part of the advantage of 3D printed structures is that specific bones in the body can be built and made of porous metal. According to Liu Zhongjun, Director of Surgery who performed the procedure, unusually shaped bones such as the atlantoaxial vertebrae are oddly shaped and can only be re-created using a 3D printer with a specific type of porous metal.

Zhongjun and his team have been in clinical trials using this procedure for about a year and have discovered that bone grows into the metal pores and enhances the strength of the implant. Zhongjun believes 3D printed implants are more reliable than traditional types and the team is waiting for approval from the Chinese Health Authority.