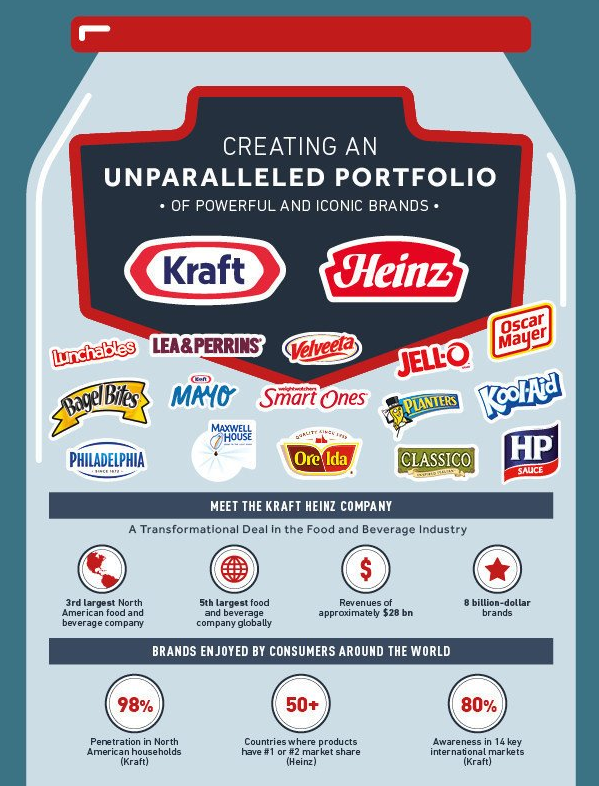 Kraft and Heinz have just announced a monster merger between the two companies, forming the fifth-largest food and beverage company in the world!

The new brand will be called The Kraft Heinz Company, which has already received $10 billion in investments from 3G Capital and Berkshire Hathaway.

Combined, the two companies will generate approximately $28 billion in annual revenues, with Heinz being known for its popular ketchup and Kraft’s notoriety coming from Velveeta cheese and Oscar Mayer meats.

“I am delighted to play a part in bringing these two winning companies and their iconic brands together,” Berkshire Hathaway CEO Warren Buffett said in a statement.

“This is my kind of transaction, uniting two world-class organizations and delivering shareholder value. I’m excited by the opportunities for what this new combined organization will achieve.”

PITTSBURGH and NORTHFIELD, Ill., March 25, 2015 /PRNewswire/ — H.J. Heinz Company and Kraft Foods Group, Inc. (NASDAQ:KRFT) today announced that they have entered into a definitive merger agreement to create The Kraft Heinz Company, forming the third largest food and beverage company in North America with an unparalleled portfolio of iconic brands.

The proposed merger creates substantial value for Kraft shareholders. The special cash dividend payment represents 27% of Kraft’s closing price as of March 24, 2015. Also, by continuing to own shares of the new combined company, Kraft shareholders will have the opportunity to participate in the new company’s long-term value creation potential.