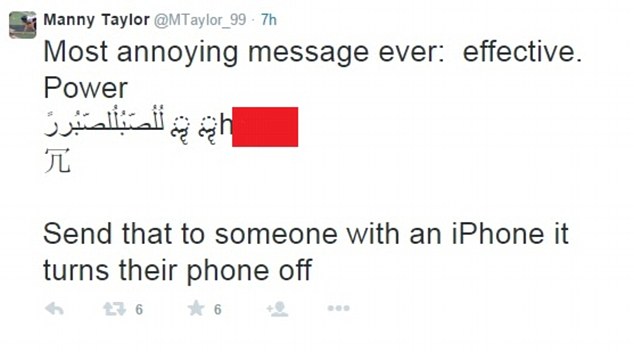 A newly discovered bug can instantly crash your iPhone when a certain text is received. The text message is a string of characters in English, Arabic, Marathi (one of India’s twenty-three official languages) and Chinese (in the same order). The bug was first discovered by Reddit users who alerted others.

Here’s the single line text message in question, but please do not send it to others: If an iPhone user receives this single line of text message while the handset is locked, the bug causes it to reboot. The bug can crash devices running on various versions of Apple’s iOS mobile operating system…be it an iPhone, iPad or iPod touch, Apple Watch or Macs.

While it is not clear what exactly has caused this glitch, Apple is working on a fix for the bug though they have not shared any timeframe for when it will be fixed.

Until a permanent fix is available, here’s what you can do to protect your device:

Microsoft To Acquire The Company Behind Minecraft For $2.5 Billion!