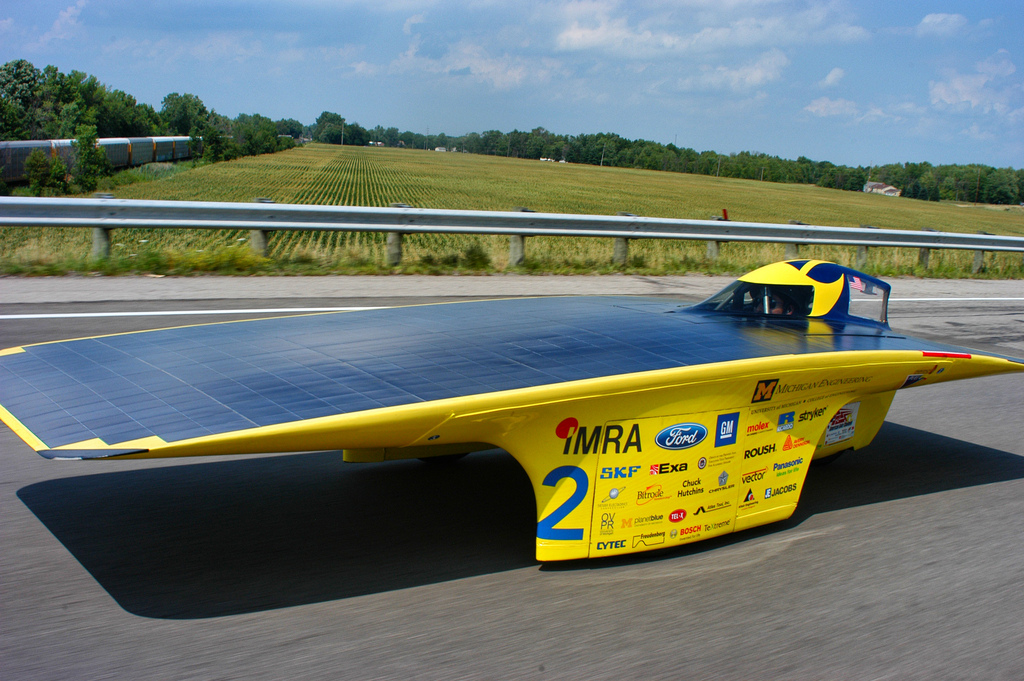 When the sun is at its peak this summer, more than 20 teams will compete in the American Solar Challenge. The event is a competition to design, build, and drive solar-powered cars in a cross-country time/distance rally event. For more than two decades, teams have competed over a 1,200-1,800 mile course between multiple cities across the country.

As a student, I was a member of the University of Michigan solar car team.  Solar car teams are student- run organizations that design, build, and race solar electric vehicles.  These vehicles have been cited previously as the “Ultimate EV,” given their extreme energy efficiency.  In fact, solar cars can travel at highway speeds using less power than your hairdryer.  Roughly speaking, this equates to an efficiency rating of over 1,400 MPGe or 15 times more efficient than the Tesla Model  S!  However, leave your golf clubs at home; these vehicles have barely enough room for the driver.

The extreme efficiency comes from using the very best solar panels and battery chemistry, as well as state-of-the-art aerodynamic and mechanical optimization techniques. In fact, minimizing air drag and optimizing the mechanical system of the car is so important, that the Michigan is redesigning several parts using Siemens NX in order to decrease the power usage of their solar car.

OEMs are taking notice as well: Ford unveiled a solar car concept this year at the Consumer Electronics Show (CES).  Additionally, Ford has cited the importance of collaborating with teams to enhance product development efforts.

The Solar Car Challenge, which will take place this July, is a grueling 1,700 mile journey stretching from Austin, TX to St. Paul, MN.  Teams will travel on the open highways, while cruising around 60 MPH entirely on solar energy.

It will certainly be exciting to watch the battle for first place. Michigan will be entering its 2012 national championship car, Quantum: check out the promo video below.  However, I expect fierce competition from MIT and University of California Berkley, since both will be entering brand new cars, with the latest solar, battery, and composites technologies.

May the best team win – but Go Blue!