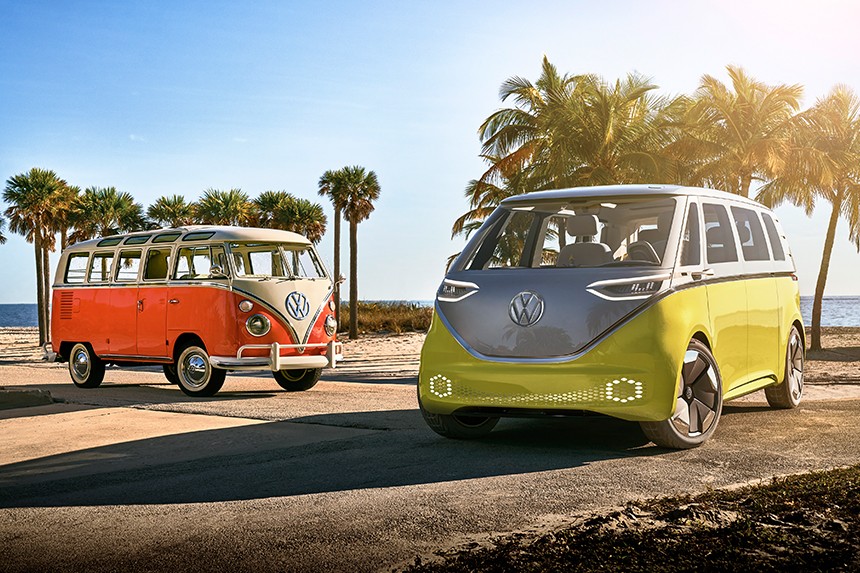 Volkswagen first entered the automobile market with the Type 1 model better known as the Beetle in 1938.

In 1950, Volkswagen produced the Type 2 most commonly known (depending on body type) as the Transporter, Kombi, Microbus or Camper.

Due to the counterculture movement of the 1960s, the Type 2 “Hippie van/bus” reached its peak popularity.

With the focus shifting in the automobile industry to electrical transportation, Volkswagen stepped into the spotlight by announcing that the award-winning I.D. Buzz (the modern transformation of the Type 2 vehicle) concept electric vehicle is planned to go on sale in the United States, Europe, and China before 2022.

Dr. Herbert Diess, Chairman of the Board of Management for the Volkswagen brand, in Pebble Beach, California had the following to say, “For me, the I.D. Buzz concept is the most beautiful and most exciting electric car in the world. Our goal is clear: we want to make the fully electric, fully connected car a bestseller around the world. The iconic car of the electric age must be a Volkswagen.”

Designed not to mimic the original Type 2 Microbus, the front V in the bodywork still reminds us of the two-tone predecessor on the original Bus.

The I.D. Buzz has a light strip that surrounds the vehicle and gives it a unique visual signature blending with the LED headlights which have hexagonal segments adding to this treat of a vehicle. The near-zero body overhangs and 22-inch wheels gives the I.D. Buzz a modern and timeless look which makes it a hallmark of Volkswagen brand.

Compared the first VW Bus which only produced 30 hp, the I.D. Buzz introduces 369 hp from the electric motors on each axle that also provide all-wheel drive. The I.D. Buzz is also equipped with a 111-kWh battery backup providing an estimated 300 miles.

Looking back from the humble beginning of the “Van”, Diess had the following to say, “It took you everywhere with your friends, it was a car but also a home on wheels, it was both reliable and unconventional, it was highly emotional. It was and still is a wonderful car.”

These Coastal Algae Farms Could Feed Ten Billion People By 2050