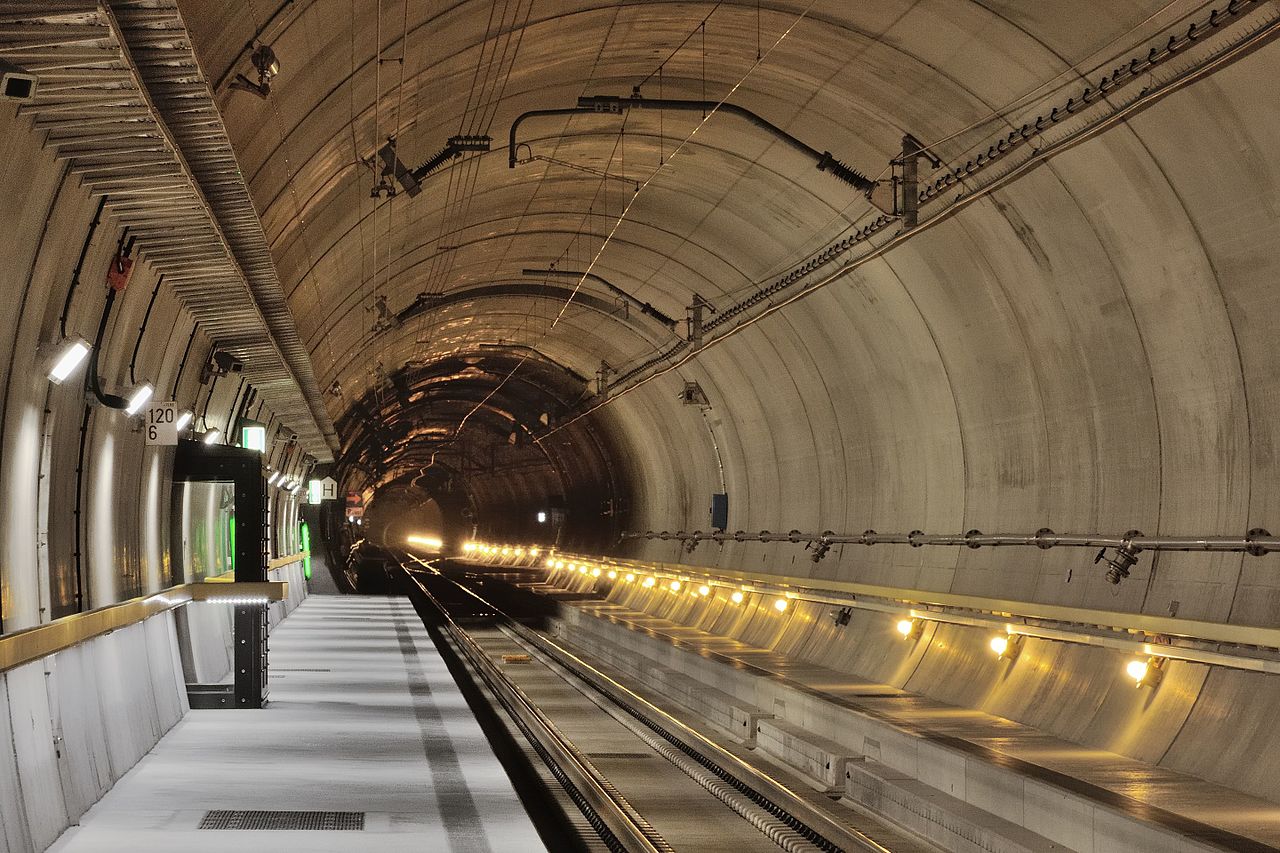 By Zacharie Grossen (Own work) [CC BY-SA 4.0], via Wikimedia Commons

When the Gotthard Base Tunnel is complete in 2016, a total of 28.2 million tons (79.8 Million cubic meters), or the equivalent of five Giza pyramids, will have been excavated using four Tunnel Boring Machines (TBM) with a maximum daily excavation of 82-98 ft (25-30m) in optimal rock conditions. Trains will shoot under the Alps at speeds of up to 160 mph (250 km/h) in two main tunnels: Gotthard Base Tunnel and Ceneri Base Tunnel.

The idea to build a road tunnel under the Alps in Switzerland was first proposed in 1947 by Carl Eduard Gruner of Basel who envisioned 94 miles (150 km) of tunnels, passages and shafts from Amsteg to Giornico. In the 1960s and 70s, the project morphed into a twin track railroad tunnel, but an economic recession caused authorities to shelve the project. In the 1980s and 1990s, the Swiss government and a majority of its people reaffirmed support for the New Rail Link through the Alps (NRLA).

The major turning point was passage of the Heavy Vehicle Tax (HVT) and an agreement to modernize the railways. Technical work began in 1993 with sounding drills and mechanical excavation began 10 years later in 2003. The project is expected to be complete in 2016 when trains will begin service.

There will be two multifunctional stations allowing trains to cross over from one tube to the other and includes special doors, numerous technical rooms, auxiliary buildings, systems rooms, control systems for cooling, ventilation and more.

Finally, tunnels include emergency stop stations, climate control systems to ensure fresh air in base tunnels and a consistent temperature. Removal of groundwater will be facilitated by installation of special ground pipes and analysis systems that will route water, based on the concentration and types of soil it contains.

The following video shows a hypothetical mishap, a train fire, and the tunnel’s ventilation system response, largely automated, that quickly brings the issue under control: