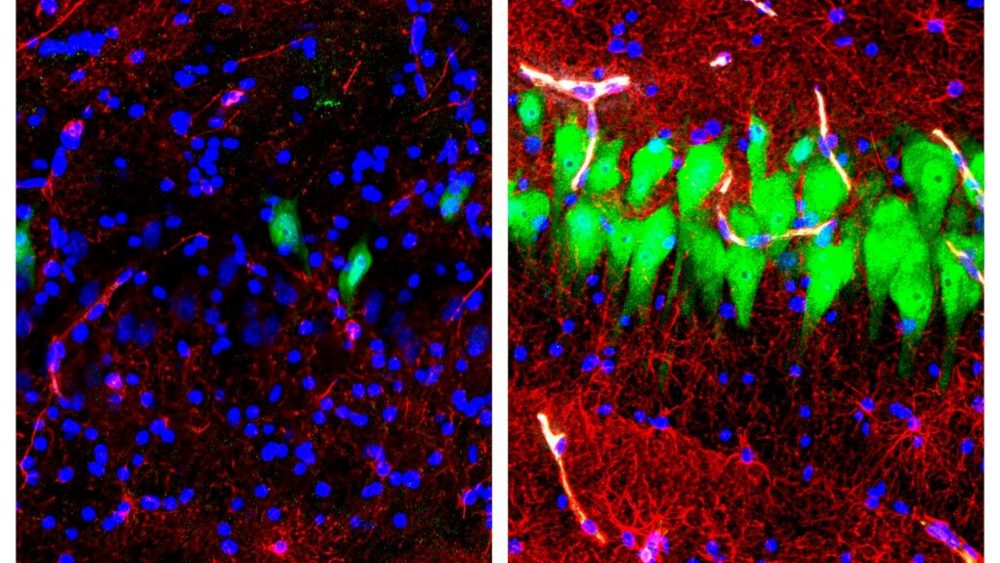 This combination of images shows stained microscope photos of neurons, green; astrocytes, red, and cell nuclei, blue, from a pig brain left untreated for 10 hours after death, left, and another with a specially designed blood substitute pumped through it. (Stefano G. Daniele, Zvonimir Vrselja/Sestan Laboratory/Yale School of Medicine)

It is believed that the brain cells irreversibly die off once the blood flow stops.

However in a big breakthrough, team of researchers managed to revive cellular activity in the brains of dead pigs four hours after the animals had died.

Researchers hope that this research could help in treatment of the victims of heart attacks and strokes while revealing the unknown facts linked with brain trauma.

Nenad Sestan, a researcher at Yale University and the lead study author, said, “By doing this, we can possibly come up with better therapies for stroke and other disorders that cause cells in the brain to die,”

Researchers used brains of 32 pigs that had been slaughtered for food purposes and discarded. Researchers pumped some chemicals into their brains. These poor animals never regained consciousness, but many of the basic cellular functions including blood circulation and metabolism switched back on for ten hours.

Sestan said, “I was tremendously surprised. We were surprised at how well the structure was preserved. We found that cell death is reduced, which is very exciting and promising. The main conceptual finding is this: cell death in the brain occurs across a longer time period than we previously thought.”

Waste Hair from Barbershops Could Be Used To Strengthen Solar Cells
From Trash to Treasure: Scientists Turn Plastic Bottles and Bags Into Liquid Fuel