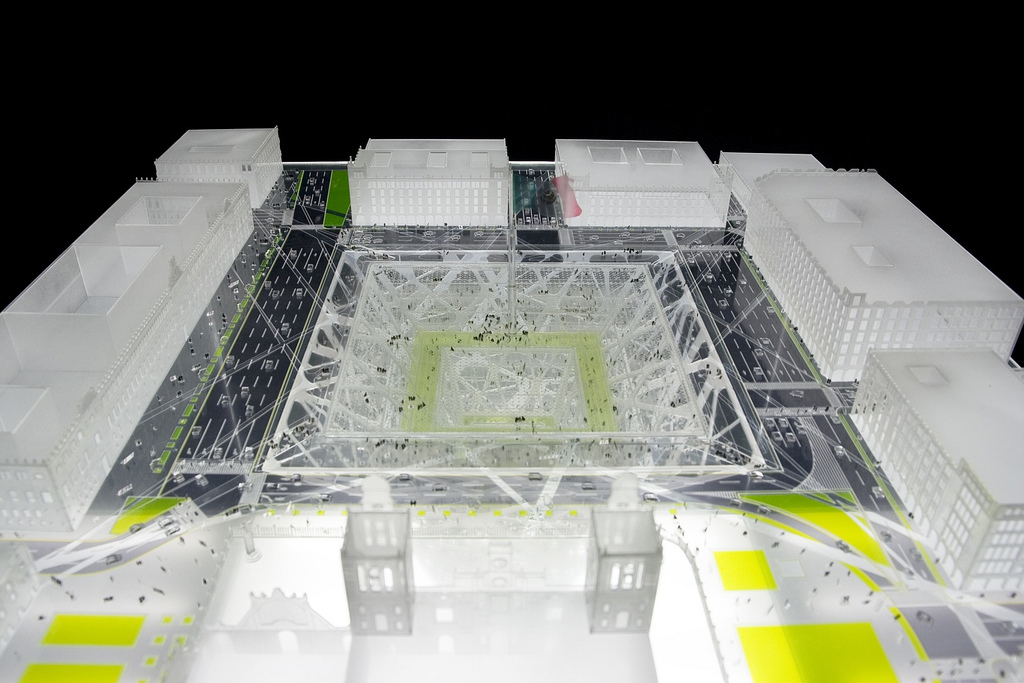 The pharaohs, the great dynastic rulers of Egypt, built pyramid structures above ground as tombs for themselves as way stations to immortality. These creations are some of the greatest human achievements in history. Some of the pyramids were built more than 4,500 years ago and required rulers with great wealth and influence.

The Aztecs of Mexico who ruled Mesoamerica from the 14th to the 16 centuries also built pyramids made of stone.

Now an architecture firm in Mexico City, BNKR Arquitectura, is championing the idea of building an inverted pyramid in Mexico City’s 190,000 ft.² ( 17,652 m²) historic main public square and center, Zocalo. Around this square are some of Mexico City’s most well-known monuments: the Cathedral, the National Palace, and the City Government buildings.

The idea for “Earthscrapers” came about when architects were seeking to increase the space available in this historic square. The only way to do it and meet stringent building and preservation criteria and preserve was to build an underground structure.

BNKR architects chose the inverted pyramid due its ability to maintain structural integrity. The Earthscraper will descend nearly 1,000 feet (304m) below the surface and potentially house up to 100,000 people.

The Earthscraper is considered an innovation in architecture, but it is not without its skeptics. The concept has merits in trying to deal with large city issues like population growth, limiting urban sprawl and maintaining open spaces. But because the idea is so new, there are no laws or guidelines for building downward in a city area and unforeseen problems could arise that could jeopardize the surrounding historic buildings.

The following video provides an overview of the earthscraper idea.

Psyche, Concert Hall & Architectural Acoustics
New Application Set To Revolutionize How Designers and Architects Work!
Architect Sou Fujimoto “Innovator of the Year”
The Winners from the Seventh Annual World Architecture Festival
Spanish Architectural Photographer Turns Munich Hotel Upside Down and Inside Out
Dutch Architectural Firm Breaks Ground on World’s First 3D Printed House
Step Inside the Historic Architectural Jewel Known as Eames House No. 8
Architect Known for Paper and Cardboard Designs Wins Pritzker Prize
The Results Are In! You Have To See Our 12 Favorite Winners Of The World’s Most Amazing Architecture!
Would You Live in the Architectural Marvels of the Tallest Residential Towers in the World?