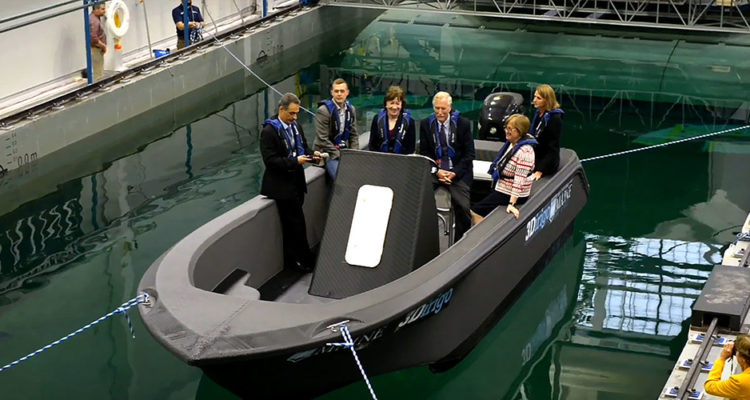 The University of Maine (UMaine) has received three Guinness World Records for one innovation. UMaine team received one world record for building the world’s largest 3D-printed boat, another for the world’s largest prototype polymer 3D printer and one for the largest solid 3D printed object.

Dubbed ‘3Dirigo’, world’s largest 3D-printed boat is 25 feet in length and it weighs 5,000 pounds. It features a multidirectional wave basin and a high-performance wind machine. 3D printer used for constructing the boat is capable of printing objects as long as 100 feet by 22 feet wide by 10 feet high. The printer can print up to 500 pounds of solid object per hour.

According to UMaine’s news release, “The UMaine Composites Center received $500,000 from the Maine Technology Institute (MTI) to form a technology cluster to help Maine boatbuilders explore how large-scale 3D printing using economical, wood-filled plastics can provide the industry with a competitive advantage,”

“The cluster brings together the expertise of UMaine researchers and marine industry leaders to further develop and commercialize 3D printing to benefit boatbuilders in the state. By 3D printing plastics with 50% wood, boat molds and parts can be produced much faster and are more economical than today’s traditional methods.”