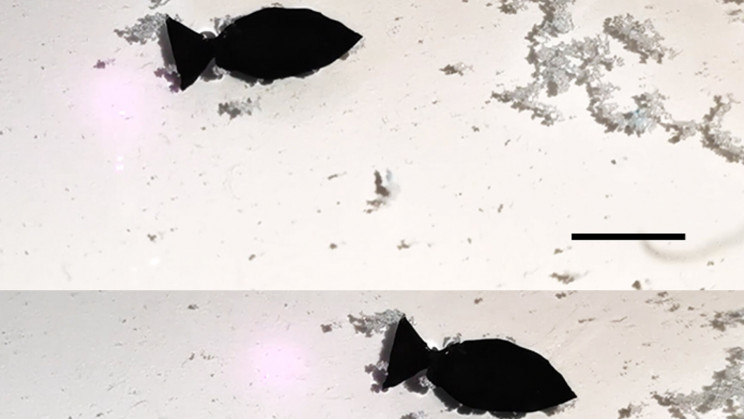 Microplastics are tiny plastic particles that fragment from plastic waste such as water bottles. Once dispersed into the environment, they are hard to get rid of. They make their way into cracks and crevices at the bottom of rivers, streams, lakes, or oceans. Microplastics can be harmful to animals and humans if ingested.

It is estimated that up to 13 million metric tons of plastic pollution enter the oceans each year.

Now, researchers from the Polymer Research Institute of Sichuan University in China, have designed a tiny light-activated fish robot that can pick up and remove microplastics from the ocean.

The tiny robot fish move through the water to remove microplastics that stick to its soft, flexible, self-healing body and transport them elsewhere.

Strong and flexible fish measure just half an inch in length!

Its tiny size helps it to reach into tiny cracks and crevices to collect microplastics that would otherwise be inaccessible. It could move nearly three body lengths per second, the same speed as active phytoplankton moving in the water but faster than any other soft swimming robot.

The tiny robot fish has no power source! So, how does this fish swim?

The fish moves when a near-infrared light laser shined on and off at a fish’s tail, propelling the robot forward.

The robot fish could be used in the future to help remove the estimated 24.4 trillion pieces of microplastics in the world’s oceans.