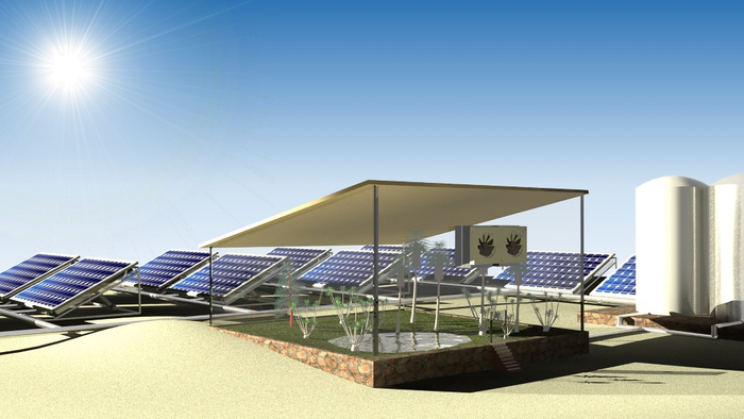 Did you know that only less than 20 percent of the energy that hits a solar panel gets turned into electricity?

Worldwide researchers are working to increase the efficiency of solar panels. But now researchers from Saudi Arabia are using the waste heat that makes panels less efficient.

For this, researchers used a layer of water-absorbing hydro-gel underneath the photovoltaic solar panels. The hydro-gel used not only absorbs water vapor from ambient air but also helps to keep the panels cool. The system is called WEC2P. The layer of hydro-gel is mounted on top of a large metal box to condense and collect water.

During the nighttime, the material collects water molecules. But during the daytime, when the sun heats up the solar panel, the water molecules evaporate and also take away excess heat energy with them.

“A fraction of the world’s population still doesn’t have access to clean water or green power, and many of them live in rural areas with arid or semi-arid climate,” said senior author Peng Wang, professor at the King Abdullah University of Science and Technology (KAUST).

“Our design makes water out of air using clean energy that would’ve been wasted and is suitable for decentralized, small-scale farms in remote places like deserts and oceanic islands.”

To test their technology, researchers conducted a plant-growing test in Saudi Arabia for two weeks in June. Water collected from the air was solely used to irrigate 60 water spinach seeds. The solar panels generated a total of 1,519 watt-hours of electricity. Out of 60 seeds, 57 of the water spinach seeds sprouted and grew normally to 18 centimetres.

“Our goal is to create an integrated system of clean energy, water, and food production, especially the water-creation part in our design, which sets us apart from current agro-photovoltaics,” said Professor Wang.