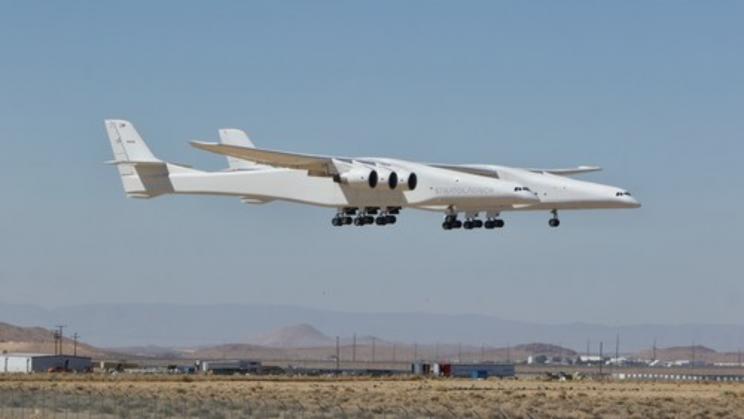 Roc, the world’s largest airplane, longer than a football field, completed its seventh test flight yesterday from Mojave Air and Space Port in California. Roc’s seventh flight lasted three hours and a minute. It gathered data on the aerodynamic characteristics of the plane during the flight.

Flying higher than ever before, it reported a peak altitude of 27,000 feet (8,200 meters) during the last test flight.

Stratolaunch LLC, an American aerospace company, has developed it to release payloads high in the sky for purposes like hypersonic flight and facilitate easy access to space.

The longest and the heaviest!

Named after a giant mythical bird, Roc has a wingspan of 385 feet (117 m). It is recognized as the world’s biggest airplane, as measured by wingspan. It is also rated as the world’s heaviest airplane at 250 tons post this year’s destruction of Ukraine’s Antonov Mriya An-225 cargo aircraft.

The Stratolaunch has been designed to carry a 550,000-pound payload and launch smaller hypersonic aircraft from altitude, sending them across the skies at speeds of over Mach 5.

One such payload, waiting to be flown is Talon-A, Stratolaunch’s 28-foot-long (8.5 m) hypersonic vehicle prototype. Talon-A is designed to fly as fast as Mach 6 or six times the speed of sound.

The Pentagon will be the prime customer of Stratolaunch’s services.