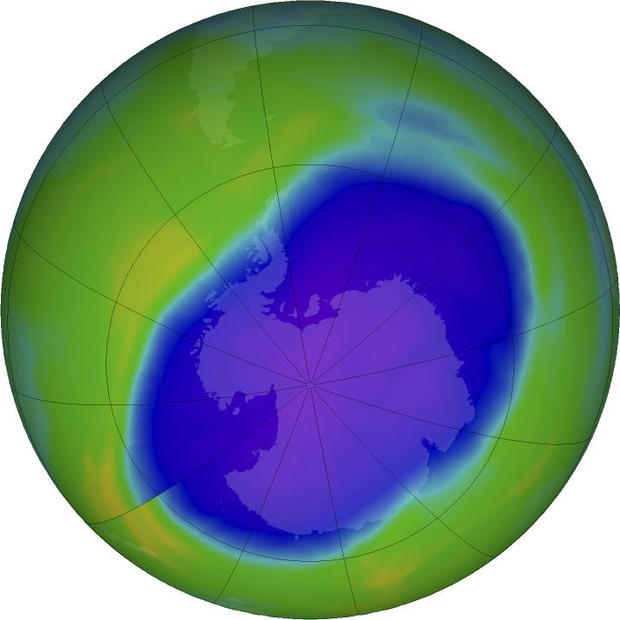 In this NASA false-color image, blue and purple show the hole in Earth’s protective ozone layer over Antarctica on Oct. 5, 2022. Image courtesy NASA VIA AP

The United Nations says that Earth’s ozone layer is on its way to recovering.

The report shows that banning the chemicals, which include chlorofluorocarbons (CFCs) once widely used in the manufacture of aerosol sprays, blowing agents for foams, air conditioners, and refrigerators, has protected the climate. It helped curb their greenhouse effect on the thin ozone layer that absorbs most of the ultraviolet radiation from the Sun.

What exactly is the ozone hole?

The ozone layer is a thin part of Earth’s atmosphere that absorbs almost all of the sun’s harmful ultraviolet light. It lies approximately 10-25 miles (15-40 km) above the Earth’s surface, in the stratosphere.

When the ozone layer is depleted, this radiation can reach the surface, causing potential harm to humans and other living things.

So, a treaty came into force in 1987 to mend a giant hole in the ozone layer. Called the Montreal Protocol, this international treaty was adopted to phase out the production and consumption of ozone-depleting substances like CFCs.

Top 2023 Emerging Innovation and Technology Trends In The Energy Sector