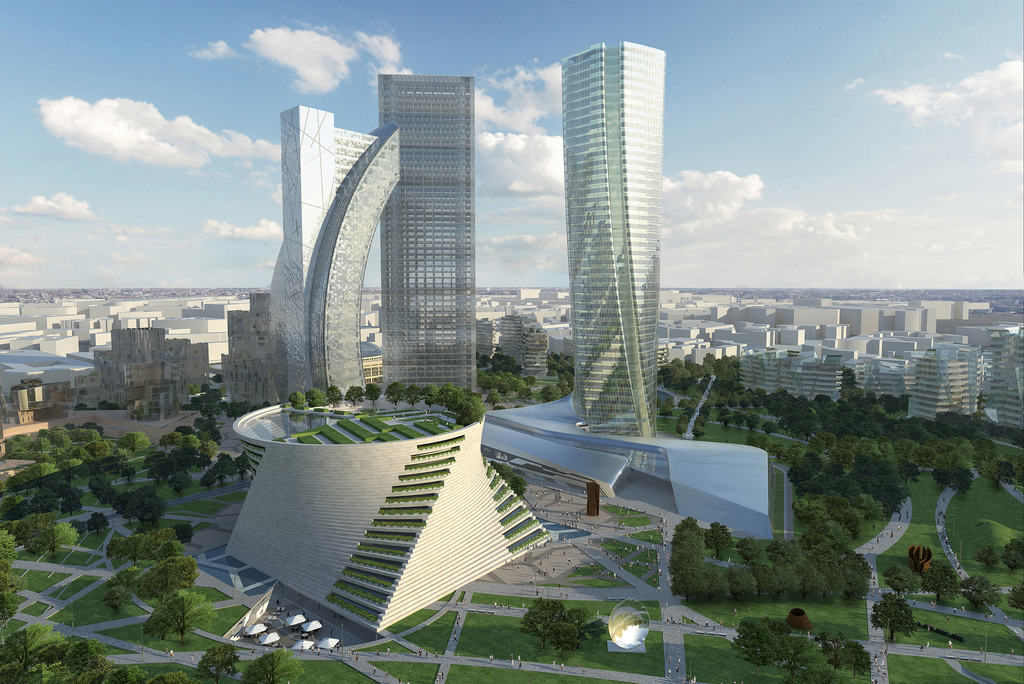 A ‘twisted’ tower designed by Zaha Hadid Architects (ZHA) is currently under construction as part of a project which will dramatically alter the skyline of Milan, Italy. Forming part of the CityLife Milano masterplan, and situated in the city’s historic Fiera district, The LEED Gold certified Hadid Tower (Torre Hadid) will be 170m high with 44 floors.

Containing both commercial and office space, with a shopping area which connects to the metro station, the Hadid Tower is being built alongside the 220m Arata Isozaki & AssociatesTower (‘the straight one’) and the 150m Daniel Libeskind Tower (‘the curved one’).

Designed with a distinctive twisted shape and dubbed ‘Lo storto’ (the Twisted One) the retail section situated at the bottom of the tower rises and twists to give way to a galleria and promenade. These twisting lines continue up through the tower to form a vertical ‘spiralling vector’.

This twisting design is made possible by using a conventional central core with a radial display of columns to support the load. According to ZHA: “The structure of the tower is conceived as a stack of equivalent, economically efficient floor slabs that incrementally twist about a vertical axis.”

The sheer height of this office tower will also mean users have sweeping views from the Piazza Firenze to the Piazza Giovanni Amendola. As well as this, attention has been paid to make the building as environmentally friendly as possible with the tower’s external skin containing a system of sun-deflecting louvers flanked by a double layer of glazing,

The three towers together will hold close to 10,000 people and will feature an art museum, a shopping district and a pavilion. The Libeskind Tower has been designed by Daniel Libeskind, renowned for his design of the new World Trade Centre in New York, with the Isozaki Tower being designed by Japanese architect Arata Isozaki and set to become one of Italy’s tallest high-rise buildings.