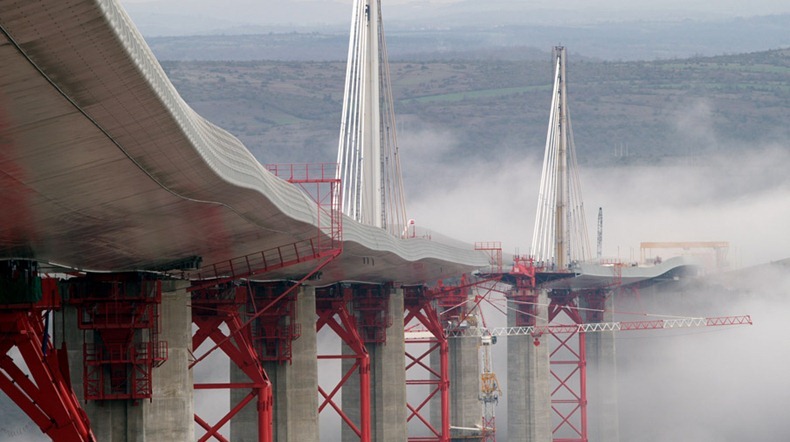 Making bridges, from the earliest days, involved a few ideas: span and forces, including compression and tension. The span is the length to be traversed. Forces include compression on the top of the bridge that pushes the top surfaces together, and tension, which pulls the bottom surfaces apart. Over millennia, the type of bridge to build depended on what obstacles were being overcome such as streams, rivers, lakes, and valleys. Around 100 B.C., the Romans invented the “Roman Arch Bridge” to evenly distribute the load and stresses of the bridge. They were made out of the earliest form of concrete, composed of mud, straw, and sticks. Modern arch bridges made of concrete generally span up to a maximum of 800 feet. From 500 to 700 A.D., the Chinese began building low stone bridges with shallow arches that would allow boats to pass under them. Following is the Danhe River Bridge, the longest masonry arch span in the world. In the early 1900s, truss bridges were developed, were made of wood, and featured a unique and modern mechanics of design. The following image is of the Gatton Railway Truss Bridge designed by Thomas and Caleb Pratt in the later 1800s. There are many types of truss bridges, including the Queen Post and the Thatcher and Truss Arch, but the main idea is that all beams are straight. In the 1920s, the suspension bridge was created and featured the use of steel cables that help suspend the bridge. The most famous suspension bridge is the Brooklyn Bridge, the oldest in the United States, connecting Manhattan and Brooklyn over the East River. It was completed in 1883.

Today’s suspension bridges span up to 7,000 feet and incorporate a truss system under the roadway to help prevent bending or twisting. IndustryTap reported on “The Most Beautiful Bridge in the World, Millau Viaduct” in which this technology was used.

The following video is a timelapse of the Millau Viaduct being built using the most advanced methods today, including prestressed concrete.