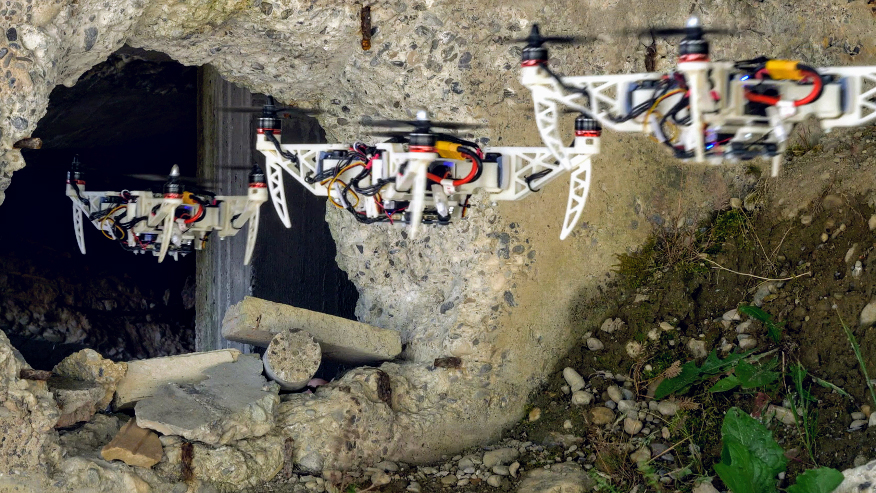 Rescuers have an extremely hard time getting to the victims of natural disasters. New research from the team at the University of Zurich tackles this very problem. They created a drone that retracts its propellers during a flight to get into tight spaces.

Although technology and safety practices are improving, there are still instances where people have to send machines to do the work for them. For example, it is almost impossible for humans to inspect the aftermath of earthquakes or fires because of the various safety hazards.

A team of researchers from the Robotics and Perception Group at the University of Zurich and the Laboratory of Intelligent Systems at EPFL made a drone that can perfectly pass through narrow cracks in the wall or between bars. The new drone can look for those trapped inside the damaged buildings or under a pile of debris and lead the rescue team towards them.

During the flight, the flying robot can squeeze its propellers to go through gaps and then return back to its previous shape. Plus, it can hold other objects while flying.

Davide Falanga, the paper’s author and a researcher at the University of Zurich said in a statement, “Our solution is quite simple from a mechanical point of view, but it is very versatile and very autonomous, with onboard perception and control systems.” The morphing drone can work quite well in small spaces while guaranteeing a stable flight. In case of approaching to tiny passages, it transforms into an “H”, an “O” or a “T” shape.

The team worked closely to create quadrotor with four propellers with independent rotation. Quadrotor’s propellers are mounted on flexible arms that fold around the main frame.

Foldable Drones in the Future

The high autonomy of the new drones makes way for successful rescue missions in the future. However, “the ultimate goal is to give the drone a high-level instruction how to enter that building, inspect every room and come back and let it work out for itself,” says Falanga.

Will the World’s Largest Solar Plant Become a Tourist Attraction?

3D Printed Robot is Powered By a Sea Slug’s Mouth Muscle
Every Day, Over 10,000 People Die From Lack Of Clean Water