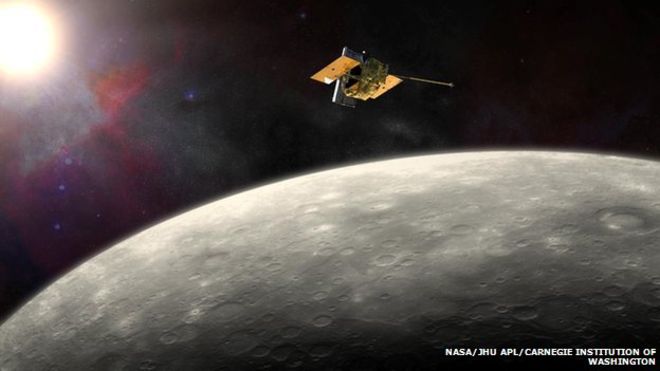 NASA’s MESSENGER spacecraft was launched in 2004. It traveled more than six and a half years before it settled into orbit around Mercury on March 18, 2011. It is the only spacecraft to ever orbit the planet.

After more than three years of orbiting Mercury, MESSENGER (MErcury Surface, Space ENvironment, GEochemistry and Ranging) ended its journey by crash landing on the surface of the planet on April 30th.

During its journey, MESSENGER collected more than 270,000 images and other data to reveal a lot of scientific mysteries of Mercury.

Some of Messenger’s final images, snapped on 26 and 29 April

Amongst the many Mercury discoveries made by the MESSENGER spacecraft, its confirmation of ice in the constant shade of deep crater rims near the planet’s poles will be often talked about. The reason is since Mercury’s rotation axis does not tilt as much as Earth’s, the Sun never gets very high in the sky at Mercury’s poles.

Since Mercury is the closest planet to the Sun, temperatures on Mercury’s surface can reach 800 degrees Fahrenheit (430 degrees Celsius) during the day. This temperature is hot enough to melt lead. But MESSENGER became the first spacecraft ever to orbit the hot little planet nonetheless.

After running out of fuel, MESSENGER smashed into Mercury at a speed of about 8,750 mph (14,081 kph). The collision created a crater on the planet’s surface. How To Manage Enterprise Password Security
After Traveling 2,600 Miles Across India, The iglide Car Enters China On It’s World Tour!