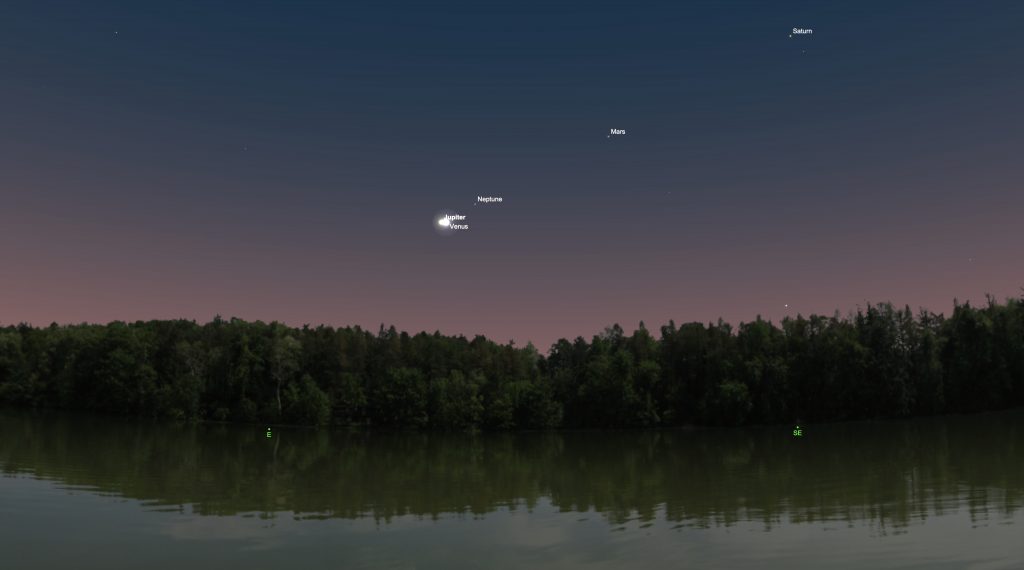 An illustration of the Jupiter-Venus conjunction looking east in Huntsville, Alabama, at 6:00 a.m. on the morning of April 30, 2022. Credit: NASA/Marshall

For those who love to gaze out into the beautiful night sky, there is an incredible and rare spectacle. Early risers can have a planet-spotting party. As four planets in our solar system Jupiter, Venus, Mars, and Saturn will be visible in a diagonal line.

Not only this, but in the early hours of 30 April 2022, you can see Venus and Jupiter ‘nearly collide‘ in the skies. Venus (brightest) and Jupiter (bright and lowest in the sky) will have glorious conjunction.

But there is no need to worry as the planets are very far away from each other. This proximity is merely an illusion. We will see this because Earth, Venus, and Jupiter will be roughly aligned. However, the planets are 690 million kilometers apart.

According to NASA, they will be so close that they’ll seem to fuse into one giant glowing mass to the naked eye. However, using binoculars or a telescope one can see the two objects more distinctly. Venus will be 0.2 degrees south of Jupiter.

Although the illusion will be visible again in the dawn hours of May 1, the position of the planets will be reversed.

It is a rare thing, as you will not be able to experience this until 2032 to see Jupiter and Venus aligns this closely.