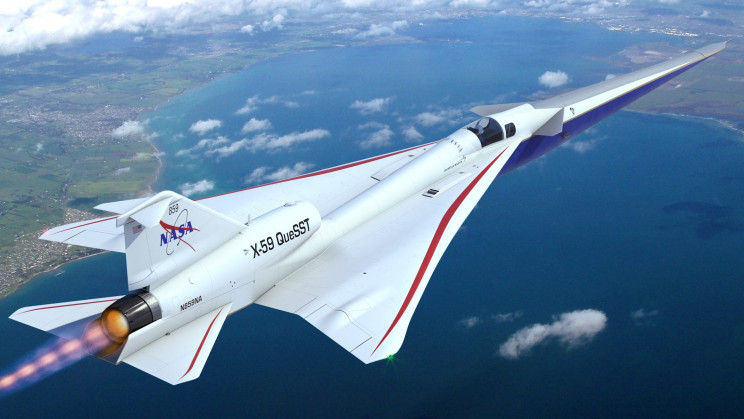 An artist’s impression of the X-59 (Image courtesy: Lockheed Martin

It is designed to produce a quieter sonic boom while flying over the populated areas at speeds faster than the speed of sound (767 mph) or Mach 1.

Lockheed Martin got the contract to develop a quiet supersonic plane in 2016 for NASA’s Low Boom Flight Demonstration project.

But the world’s first supersonic commercial aircraft the revolutionary “Concorde” was retired in 2003 after 27 years of commercial operations. This was due the shockwave or sonic boom it sent into the air. When it approached supersonic speed, its sonic boom was so loud that people living under its flight path criticized the enormous noise it produced.

It generated a huge amount of sound energy, approximately 110 decibels. That sounds like explosions that can be heard from 30 miles (48 km) away. Regular exposure to this sound for more than one-minute risks permanent hearing loss.

But the X-59 is NASA’s answer to this problem that could transform aviation industry!

The X-59’s supersonic boom will be “closer to a car door slamming” than the Concorde’s shockwave that was strong enough to shatter the glass windows.

If all goes as per the plan, the X-59 will fly for the first time later this year.