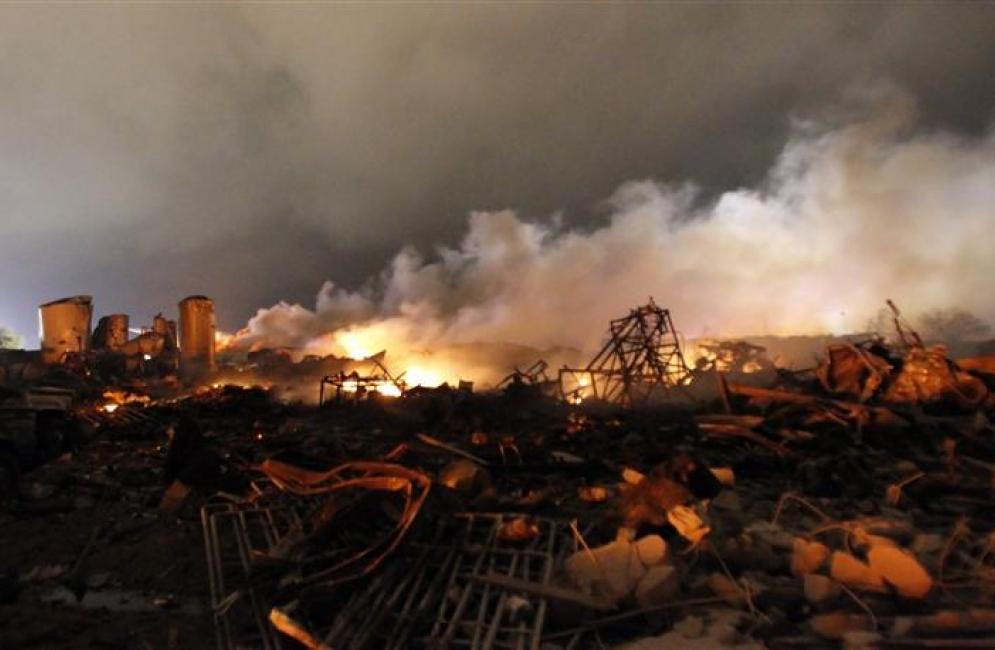 The worst industrial accident in US history occurred in 1947 when ammonium nitrate was detonated aboard the ship in a Texas port killing 600 people. In terms of the total amount of human and property destruction the West, Texas explosion may come to rival the 1947 event.

The long history of the handling of ammonium nitrate, stretching back half a century, is littered with devastating explosions that have destroyed property and taken lives all across the globe.  The amount of damage inflicted in these events is directly proportional to the amount of fuel burned or the total energy available, the maximum flame velocity, and way in which the combustible gases are stored.

The following video shows an explosion of 1 ton of TNT. The West, Texas explosion is estimated at between 1 and 5 tons of TNT.

Forensics investigators caution it is too early to determine the exact cause but noted two major classes of incidents involving ammonium nitrate. First, anhydrous ammonia, stored in liquid form becomes a vapor which when mixed with air is extremely explosive. Second, ammonium nitrate, stored at the facility, could have exploded.

Deflagration, meaning to burn down, describes the rapid high energy combustion event that propagates through gas or other combustible material at subsonic speeds and is driven by heat transfer

Seismologists use the Richter scale to measure the size of earthquakes in terms of the energy released. The reading is a combination of a measure of the rigidity of the earth multiplied by the average slip and the size of the slip area.