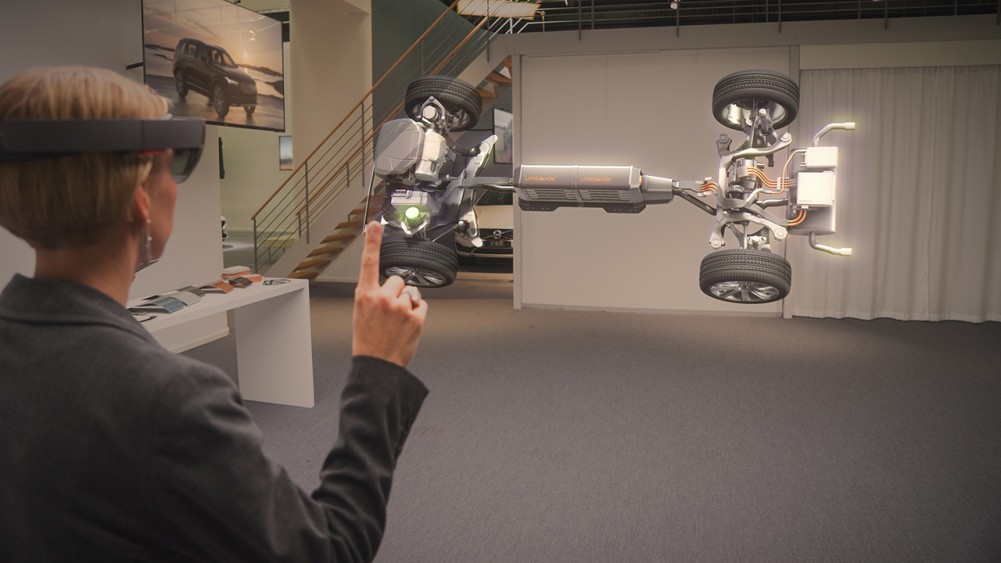 Alex Kipman graduated from RIT in 2001 and joined Microsoft. In 2008, he created the Microsoft Kinect, a motion controller that revolutionized gaming and became the fastest selling consumer device ever with 1 million Kinects sold in the first 24 hours.

Kipman’s HoloLens is a new device that allows a user to experience interactive holographic worlds in which digital content is mixed into our field of experience.

In the following TED presentation “A Futuristic Vision of the Age of Holograms,” Kipman explains the revolution that HoloLens represents and how it will allow us to get away from our current two-dimensional computer experience.

The transcript of Kipman’s talk in the video above, minus the Q&A, is included below for quick reading.

Thousands of years from now, we’ll look back at the first century of computing as a fascinating but very peculiar time — the only time in history where humans were reduced to live in 2D space, interacting with technology as if we were machines; a singular, 100-year period in the vastness of time where humans communicated, were entertained and managed their lives from behind a screen.

Today, we spend most of our time tapping and looking at screens. What happened to interacting with each other? I don’t know about you, but I feel limited inside this 2D world of monitors and pixels. And it is this very limitation and my desire to connect with people that inspires me as a creator. Put simply: I want to create a new reality, a reality where technology brings us infinitely closer to each other, a reality where people, not devices, are the center of everything.

This is the next step in the evolution. This is Microsoft HoloLens, the first fully untethered holographic computer. Devices like this will bring 3D holographic content right into our world, enhancing the way we experience life beyond our ordinary range of perceptions. Now, I’m not thinking about a distant future.I’m talking about today. We are already seeing car companies like Volvo designing cars differently with HoloLens; universities like Case Western redefining the way medical students learn; and my personal favorite, NASA is using HoloLens to let scientists explore planets holographically.

Now, this is important. By bringing holograms into our world, I’m not just talking about a new device or a better computer. I’m talking about freeing ourselves from the 2D confines of traditional computing.

Put it this way: temporally adjusted, we’re like cave people in computer terms. We’ve barely discovered charcoal and started drawing the first stick figures in our cave. Now, this is the perspective I apply to my work every single day. And now for the next few minutes, I invite all of you to apply the same perspectiveto the journey ahead of us.

Now, as I put this HoloLens on, let me explain the setup a little bit. It’s probably the most risky demo we have ever done on any stage with HoloLens, and I can’t think of a better place to do it than here at TED.Momentarily, I am going to be seeing holograms right on this stage, just as clearly as I can see all of you.Now at the same time, we have also this special camera that just walked in onstage so that all of you can share in this experience with me up on all the monitors.

So let’s start our journey. And what better place to begin our journey, than in the computer cave of 2D.Let’s explore the world all around us with this new lens, and understand the computer world from a brand new perspective.

The computer universe is both marvelous and primitive. It’s a universe based on causality. As developers, we dream the different causes and then we program the different effects. Double click on an icon, that’s a cause. Open an application, that’s an effect. Now when we compare this to our physical universe, it is overly constraining, because our universe is not digital. Our universe is analog. Our universe doesn’t think in terms of zero or one, true or false, or black or white. We exist in a world governed by quantum physics,a universe of zero and one both at the same time, a reality based on infinite probabilities and shades of gray. You can see how these two worlds collide.

I think it’s because computers give us superpowers. Within the digital universe, we have the power to displace space and the power to displace time. It doesn’t matter if you’re using technology for entertainment, productivity or communication. Think of it this way: let’s all go home tonight and watch our favorite show on television. This is theater — time and space displaced. As soon as I’m done with this TED Talk, I’m going to immediately call my lovely family in Seattle. That’s displacement of space. Now, these are such great superpowers that we put up with the two-dimensional limitations of our current digital world. But what if we didn’t have to? What if we could have these same digital powers in our world? You can already see glimmers of this, but I believe our children’s children will grow up in a world devoid of 2D technology. It’s remarkable to dream of this world, a world where technology truly understands us — where we live, work and communicate — with tools that enhance the human experience, not machines that limit our humanity.

So how do we get there? For me, the answer required looking at the problem from a different perspective. It required sensing the world from the perspective of a machine. If you’re a machine trying to sense our world, how would you actually break the problem down? You’d probably try to classify thingsas a human, an environment or an object. But how would that machine then interact with reality? And I can think of three ways.

First, as a machine, I would observe or I would input reality. Speech recognition and biometric authentication are great examples of a machine interacting with humans from an input perspective.Secondly, as a machine, I could place digital information, or output information, into reality. Holograms are examples of a machine interacting with an environment from an output perspective. Finally, as a machine, I could exchange energy with the world via haptics. Now, imagine being able to feel the temperature of a virtual object, or better yet, imagine pushing a hologram and having it push you back with equal force.

With this perspective, we are able to collapse reality into a simple matrix. Now here’s a secret: as an engineer, I get really excited anytime I can reduce something to the matrix. From self-driving cars to smartphones to this holographic computer on my head, machines are becoming capable of understanding our world. And they are starting to interact with us in significantly more personal ways.

Less than half a century ago, two courageous men landed on the moon, using computers that were less powerful than the phones in your pockets. Six hundred million humans watched them on grainy, black-and-white televisions. And the world? The world was mesmerized.

Now imagine how our children and their children will experience the continued exploration of space with technology that understands this world. We already live in a world where real-time universal translators exist. And I can squint, and I can already see holographic telepresence in our near future. In fact, since we’ve been lucky with our demo so far, let’s try doing something else even more crazy. I invite you to experience, for the first time anywhere in the world, here on the TED stage, a real-life holographic teleportation, between me and my friend, Dr. Jeffrey Norris, from NASA’s Jet Propulsion Laboratory.