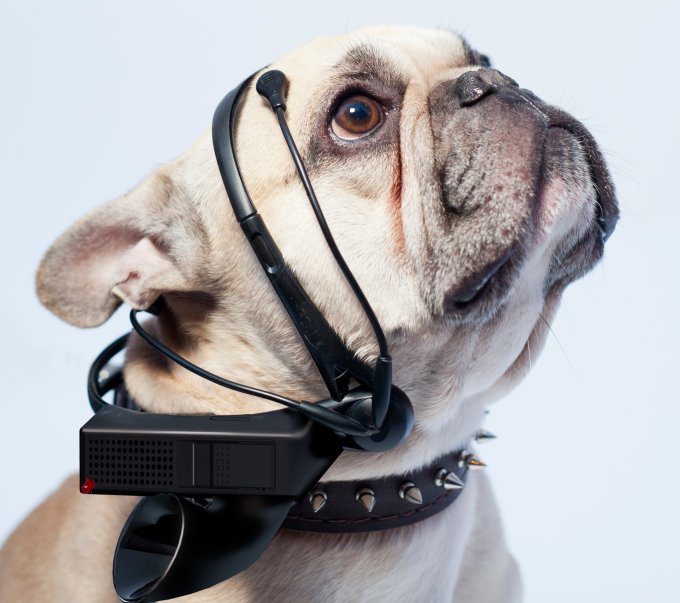 What does your dog want you to know? Put this headset on him to find out. Photo © NCID

Most dog owners think that their dog understands what they are thinking. But what does your dog have to say to you?

Thanks to a team of Swedish researchers from Nordic Society for Invention and Discovery (NCID), we may soon find out. They have developed a doggie headset called “No More Woof” that can read animal brainwaves and translate them into human speech.

How it works: ‘No More Woof’ is a small EEG-reading headset with an Arduino brain. This headset is placed on a dog’s head and, whenever a thought crosses your dog’s brain, the information is sent to a microcomputer where it is processed and translated into English. The headset can read mental states such as fatigue, hunger and excitement.

Different models available: This headset is accessible in Micro, Standard, and Superior models which are able to read up to four distinct thought patterns. You can get a single-sensor “No More Woof Micro” that can translate three emotions for only $65 or you can buy the superior models for $1,200. This superior model comes with a fully-customizable color appearance and will allow you to learn more of how your dog thinks and reacts.

More to achieve: ‘No More Woof’ won’t actually eliminate the woofs or barking. However, your dog’s barking will be accompanied by an audible “I’m tired!” or “I am hungry”.

“No More Woof” is still a work in progress but is expecting it to hit the market in April 2014. The team is working to get its converter to speak in other languages, facilitate two-way communication, control artificial limbs and assist in training.

The team hit its $10,000 goal on Indiegogo ahead of schedule and received an additional $5,000 in crowd-funding. NCID put this “No More Woof” demo together to discuss the project and show you how the headset works: