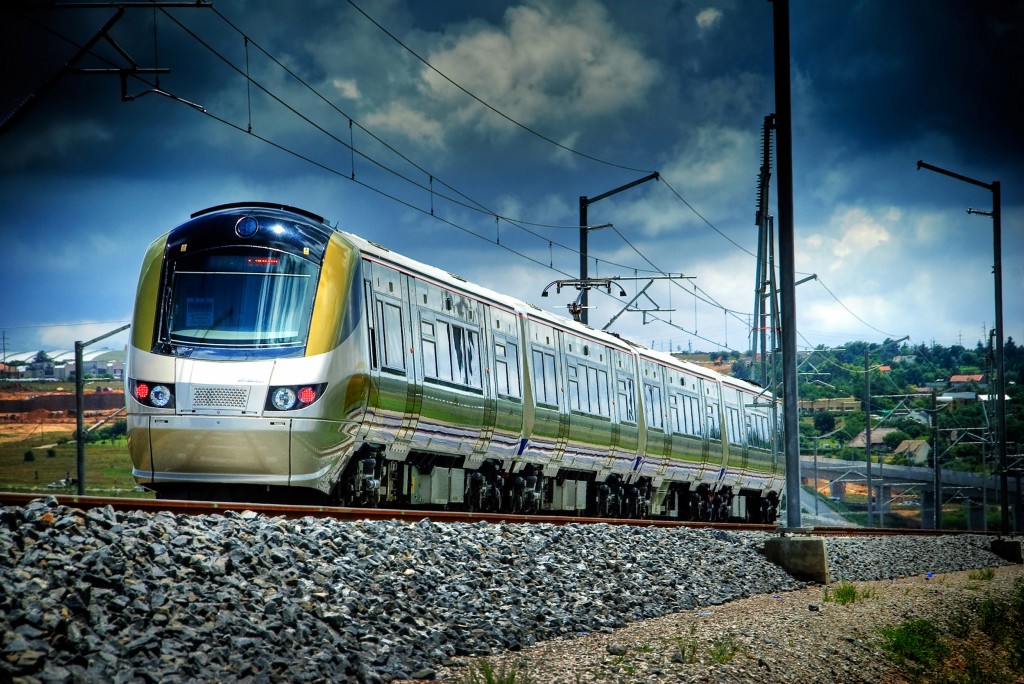 A consortium including Bombardier Transportation, Bouygues Travaux Publics and Murray Roberts, among others began work in 2006 and built 10 stations including four at-grade, three elevated, and three underground stations.

Fifteen trains were manufactured and assembled by Bombardier in Derby, England and nine trains were assembled in South Africa using components manufactured in Britain. There are 24 trains in all, each with four cars. Nineteen trains now service the commuter network and five are linked to the airport.

Most of Gautrain’s rail track tunnels were excavated using drilling and blasting; holes were drilled and filled with dynamite and detonated causing rock to collapse thereby lengthening the distance of the tunnel. Creating a circular shaped tunnel requires careful calculation of the position and depth of each hole to be drilled and blasted. Engineers employed innovative techniques for the construction of Gautrain Viaducts crossing over busy freeways. Using balanced cantilever construction long spans, bridges were built over areas where construction from the ground was not possible. This involved the construction of concrete reinforced shafts or piled foundations that were socketed into hard dolomite bedrock. Each shaft is 7 m in diameter and reaches depths up to 30 m. The Viaduct piers were then created followed by construction of the viaduct segments. Traditional top-down shaft sinking methods involve making a hole in the ground which is progressively deepened and lined until the required depth is reached. In Raise Boring underground access is available at the bottom of the proposed shaft. The Raise Bore rig is set up on a concrete platform and a small diameter pilot hole is drilled to intersect with the free space below. At this point a “reamer head” is attached to the drill string which rotates under pressure against the rock surface slowly enlarging the pilot hole.

Non-Tunnel sections of the track were laid using a conventional ballasted track system; inside tunnels a “state-of-the-art” track form system consisting of pre-cast concrete blocks surrounded with a rubber boot cast into concrete was used.