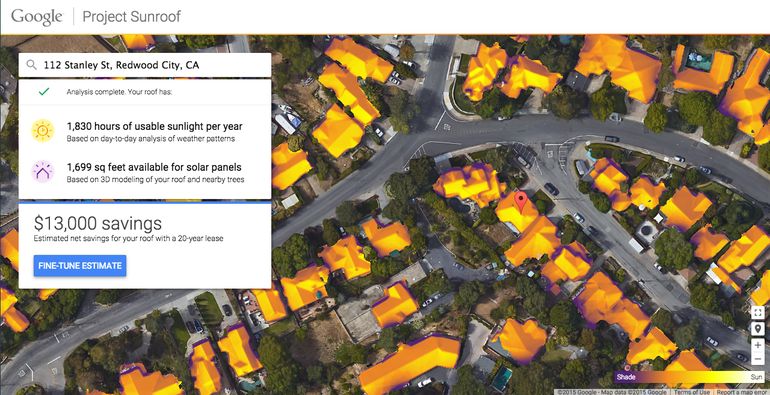 Demand for solar power is increasing at an exponential rate, but calculating the costs versus benefits can be an insurmountable challenge for the homeowner. If solar is going to become a norm for single family residences, there needs to be a simplified means for the average Joe and Jane to determine if solar, and just how much of it, might be a good fit for their specific circumstances.

Now, Google Maps wants to help with that through their newly launched Project Sunroof. Pulling from their aerial views and other database information, they can amass all the variables for your address and do the calculations for you. And if you want, they can help you find a solar installer in your area.

Project Sunroof wants “to make installing solar panels easy and understandable for anyone.”

You just plug in your address and Google Maps finds it, then uses other available data to create a 3-D image of your roof, indicating shadows from trees and other obstacles. It then accounts for the sun’s position over the course of a year and considers typical patterns of heat and cloud cover in your area. With this information, Project Sunroof can estimate the amount of sun available to your roof.

Then, begin the customized calculations. Using the information gathered above and your average electric bill to determine usage, Project Sunroof estimates the kilowatts (kW) of solar needed to provide a bit less than 100% of your needs. This is because generating excess power is usually not cost effective to make it worth the extra cost of an additional solar installation.

Once Project Sunroof has determined your solar needs, it compiles any federal and state tax credits, utility company rebates offered, and local net metering opportunities and calculates the likely cost. The program then assesses current industry pricing and options in your area and recommends either taking out a loan, purchasing outright, or leasing solar panels. If you want, and ONLY if you request it, they will send your information to solar providers you select. Unfortunately, Project Sunroof has only been initiated so far in Boston, Fresno, and the San Francisco Bay area. But once the trial with these cities provides results, there is every reason to believe that Project Sunroof will expand its reach. It is certainly an idea whose time has come and Google Maps, with the data collection they have already amassed, would be in the most likely position to pull it off.

The idea of massive acreage filled with solar panels does not conjure an attractive image and is fraught with obstacles of delivery and reliability. The centralized model of providing energy is stuck in a dinosaur mentality. Utilizing the “acreage” available on rooftops, and decentralizing the sources of production and distribution, is all in keeping with the progressive “collaborative economy” that values peer-to-peer services and resource sharing.

The obstruction is usually perpetrated by a legislative lack of future vision and the influence peddling of the energy sector’s lobbyists. A project such as this, expanded to a nationwide scale, can offer accurate information about solar potential and provide real numbers for cost versus benefit data analysis, which should include economic “externalities” generally borne by the public, such as air and water pollution and the resulting social costs. With such undeniable data, perhaps the energy institutions will work with the flow of future energy production instead of clinging to bygone eras. Let’s hope it holds true that, “If the people lead, the leaders will follow.”

Did Elon Musk Visit the Pentagon to Discuss an Iron-Man-Like Metal Suit?

Electric Space Sail To Get Its First Test