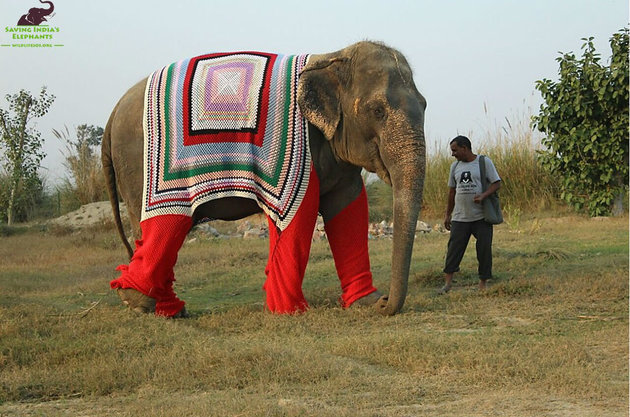 The rescued elephants that suffered neglect, abuse, and exploitation earlier, now get the second chance to live at the Wildlife SOS Conservation and Care Center in Mathura. At SOS, they live happy and healthy lives. The elephants are given plenty of open spaces, the best medical facilities, plenty of food, and frequent baths. Now, compassionate villagers have knitted giant sweaters for the elephants to keep them cozy during a recent bout of cold weather.

At present, the center has 20 elephants which are rescued from circuses, illegal captivity, and trafficking mafia. SOS plans to rescue another 50 elephants this year.

Kartick Satyanarayan, founder of the Wildlife SOS Conservation and Care Center, said, “It is important to keep our elephants protected from the bitter cold during this extreme winter, as they are weak and vulnerable having suffered so much abuse making them susceptible to ailments such as pneumonia. The cold also aggravates their arthritis which is a common issue that our rescued elephants have to deal with.”

The villagers knitting these jumpers are putting in their best efforts. However, considering the size of elephants, it takes up to four weeks to produce a single sweater. Therefore, only three of the 20 elephants at the sanctuary got their sweaters while the rest have been given blankets.