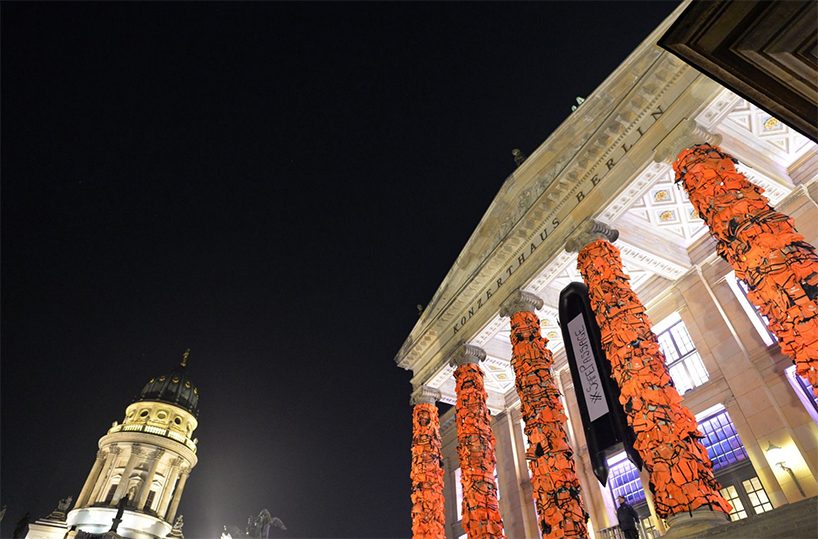 Ai Weiwei has been a staunch activist in drawing attention to the humanitarian crisis of people fleeing war-torn countries. He’s made numerous trips to the Greek island of Lesbos, a gateway on the refugees’ journey seeking security and shelter. He even pulled his “Ruptures” exhibit from Copenhagen in January to protest Denmark’s new confiscation law that forfeits refugees’ right to their few possessions.

With consent of the Greek government, Ai Weiwei collected 14,000 bright orange life vests discarded on a beach. To be clear, that is a small representation of the more than a million refugees who have fled by sea and the more than 400 who died along the way. But, the display was sufficient to make a dramatic impression on the attendees of the Cinema for Peace gala in February. The life jackets were strung together and hoisted by crane up the massive pillars of the Konzerthaus. The six columns were fully encased and a raft hung above the entrance stating “Safe Passage” across the bottom. Those in attendance were clearly moved.

But, the exhibit was not without its detractors as well. Berlin’s Culture Secretary took particular offense at the celebrities who wore shiny gold emergency blankets as a shoulder wrap.

For Ai Weiwei, the controversy is a welcome response because it draws attention and causes dialogue. His art is generally not created to provide pleasure; it is designed to make the recipient uncomfortable. And, his expressions are not limited to a specific form. Ai is renowned for visual and performance art, photography, architecture, and even music. The 58 year old artist is a product of his unusual life and family background. Ai’s father was the Chinese poet Ai Qing, who was sent to a labor camp when Ai Weiwei was a baby. The family was exiled for a time and when they returned to Bejing 16 years later, Ai Weiwei entered the Bejing Film Academy studying animation. For a time in the ’80s and ’90s, he studied in New York and befriended the poet Alan Ginsberg, who had known Ai’s father. When his father became ill, Ai returned to China.

Ai Weiwei is most commonly noted for his design at the 2008 Bejing olympics, which he denounced and refused to take part in any publicity about. His blogging and exhibitions that were unfavorable to the government got him held under house arrest and prevented him from being free to leave China. He was arrested at the airport on his way to Hong Kong in April 2011. Museums worldwide protested and called for his release. He was released a few months later and was finally granted a passport in 2015.

For Ai Weiwei, an artist who gains a platform for expression has a responsibility to use those talents to address the world’s wrongs. Even during his confinement he was impacting the arts with awards given him and associations he made. Now that he’s on the move again, Ai Weiwei’s not wasting any time in using his controversial art to force the world to look at harsh realities.