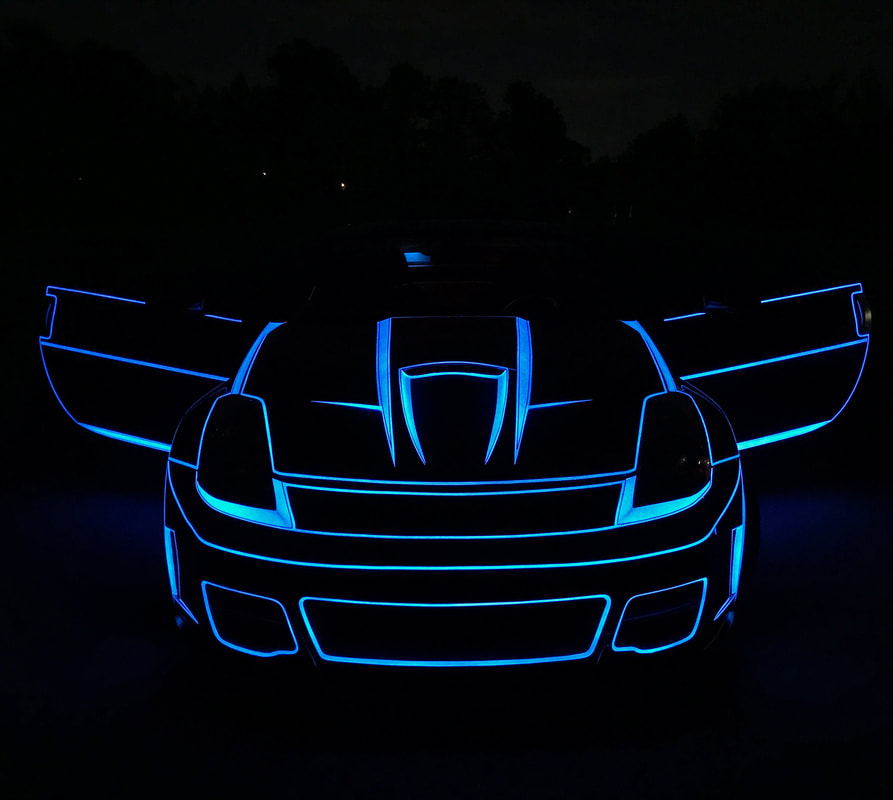 Are you a motorist who wants to stand out on the road? Then you’ll love this new invention.

LumiLor, a paint created by Darkside Scientific, uses an electrical charge to light up. The innovative material can be sprayed right onto a vehicle, just like any other type of paint. With the flick of a button, you can outline your car in a futuristic neon design.

Passers-by might mistake the car for an LED display. If charged, the paint is bright enough to see in daylight. When switched off, though, the design is invisible.

A New Type of Technology

The technology works by sandwiching multiple conductive layers together. If an electrical current is applied, the paint glows. When not charged, the material looks like any other type of paint.

You can apply the five colors — aqua, blue, green, orange and white — to almost any surface. Unfortunately, the luminescence of the paint doesn’t last forever. It has a half-life of 10,000 hours — more than 400 days of continuous use.

The product has been years in the making. It was created by Andy Zskinko, a mastermind with 25 years of experience in automotive painting. His vision was to increase visibility and safety for motorists, especially motorcycles.

The technology comes with a price, though — about $4.50 per square inch. A paint job could ring in at the tens of thousands for a standard car, way more than other types of paint.

If budget is a concern, many auto enthusiasts opt for alternative customizations. Full and partial vehicle wraps create a dramatic visual display in different colors and graphics. You can apply wraps to cars, trucks, boats, motorcycles, bicycles and more.

A Look at the Future

In 2015, Chevy showcased the new paint at the Las Vegas SEMI Show. The 2016 Camaro flashed and glowed an eye-catching green. Spectators oohed and aahed. The prototype, coined Krypton, utilizes layers and flash patterns of conductive color.

Lexus used the material that same year during a race held in the dead of night. Three drivers were hooked up to heart-rate monitors. As they drove, the paint pulsed with the beat of their hearts.

In 2016, Tim Donaghue, an auto body mechanic, began riding his Kawasaki Vulcan 1500 painted with LumiLor around town. His shop is one of only five in the country licensed to apply the electroluminescent paint. His goal isn’t to gain business, though — it’s to increase visibility and improve safety.

Donaghue claims the paint has use beyond cars and motorcycles. He’s also applied it to guitars, helmets and fake skulls for local theater props. “We can pretty much paint it on any shape, any surface,” he said.

One year later, Darkside Scientific perfected a formula of LumiLor that can withstand jet travel. The paint, when applied to an aircraft, is visible from long distances and projects through weather conditions like fog, smoke and snow.

How will companies and enthusiasts use LumiLor in the future? While the paint has few limitations when it comes to illumination, there are concerns over potential government regulations. For now, though, most gear junkies are just waiting for the price to drop.

The California Exodus – Where Are People & Businesses Moving to?