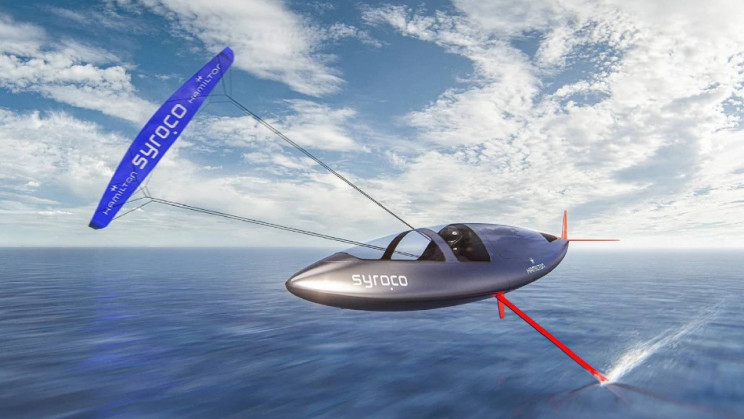 The French innovation lab start-up Syroco’s Moonshot 1 is designed to break records. Moonshot I plans to pass the 80-knot mark (over 92 mph) in the next year. Syroco is planning to beat the Vestas Sailrocket 2’s 2012 record of 55.32 knots (63.7 mph) in Walvis Bay, Namibia.

Moonshot I is a kite combined with a 20-foot-long pod. The pod holds two people that fly a few feet above the surface, using foils to keep it grounded to the water.

Using Moonshot I, French kiteboarder Alexandre Caizergues wants to break this record that has remained untouched for a decade. Caizergues and his team are working on pushing the limits of sailing. Caizergues is the two-time World Sailing Speed Record-man (2008, 2010) and four-time Kite Speed World Champion (2007, 2009, 2013, 2017).

“We’re not following the same concept as the Sailrocket,” says Alexandre Caizergues.

For designing Moonshot I, Caizergues worked with Yves de Montcheuil, a team of sailors, naval architects, and even specialists from the helicopter sector.

“Keeping true to Syroco’s pioneering spirit and thirst for discovery, research has already made it possible to question fundamental paradigms in naval architecture. For only research, coupled with excellence in commitment and execution, can make possible the Moonshot Challenges, the pioneering achievements targeted by Syroco,” states Syroco’s website.