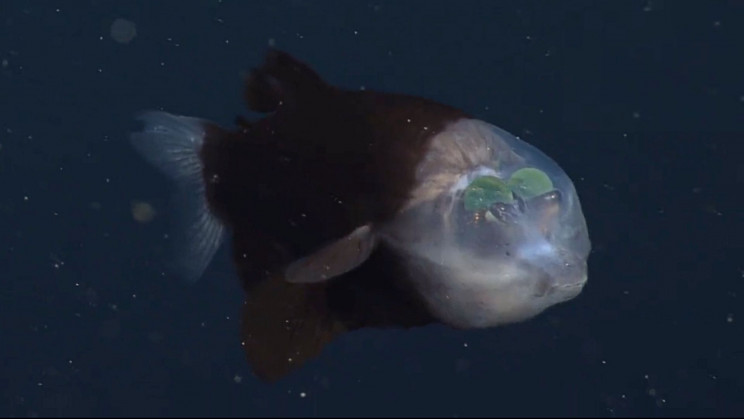 But still, we know very little about oceans…more than 80% of it remains unmapped, unobserved, and unexplored. The deepest depths of oceans are pitch-dark, with freezing cold water and very high pressure. There’s a whole different world down below the deep sea, and it is full of unexplored species and creatures.

Recently researchers from Monterey Bay Aquarium Research Institute (MBARI) in California shared footage of a super-rare deep-sea creature. The fish had a translucent head and googly eyes that peer out through its forehead.

Known as barreleye fish or Macropinna microstoma, these fish are very rarely seen

These fish live between 600 and 800 meters down, where the water plunges into complete darkness. Although it is accessible enough for remotely operated vehicles (ROVs) to explore, it is rarely seen.

MBARI scientists say that despite having sent their ROVs on over 5,600 dives in the fish’s habitat they spotted it just nine times. But recently, the ROV picked up a barreleye fish suspended in the water at a depth of about 650 meters.

Thomas Knowles, a senior aquarist at the Monterey Bay Aquarium said, “The barreleye first appeared very small out in the blue distance, but I immediately knew what I was looking at. It couldn’t be mistaken for anything else.”

Although scientists don’t know much about this fish, researchers believe that these fish generally waits motionless to catch prey. In the light of the ROV, researchers were able to see its eyes glowing bright green through the fluid-filled shield of the fish’s head. According to MBARI, the barreleye fish usually lives around the Bering Sea, Japan, and Baja California.