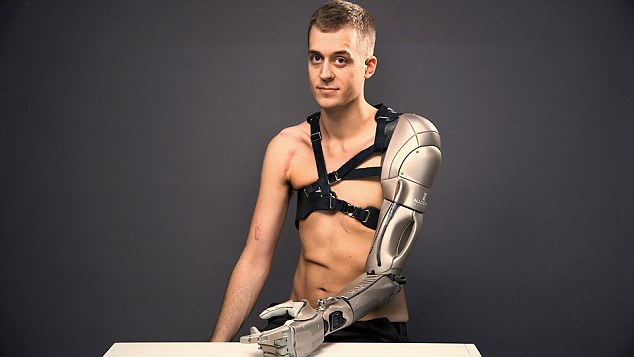 James Young, a passionate gamer, met with a horrible accident on May 18, 2012, when he fell under a train. Although saved from death, he damaged his left arm, and his lower left leg was severed.

Despite his injuries, James refused to give up, and gradually he adapted to use one hand only while playing games.

Now, a Konami developer and publisher of the Metal Gear Solid titles is working with a leading prosthesis artist Sophie De Oliviera Barata and a technical team to outfit James with a bespoke limb. This is inspired by the new PlayStation 4 game Metal Gear Solid V’s protagonist Snake. More about this futuristic limb:

Sophie gave the limb a personalized look. It is made by using a 3D printer. It is designed to pick up even the tiniest objects like a coin using the ‘commands’ sent by the shoulder muscles communicating with the sensors. James said, “It gives me a hand – and not a device. It’s soft, but firm, so it’s really nice to shake!”

It also features a laser light, a torch, a USB port, a watch, and even a drone, which is fixed on a panel on the outside of the shoulder.