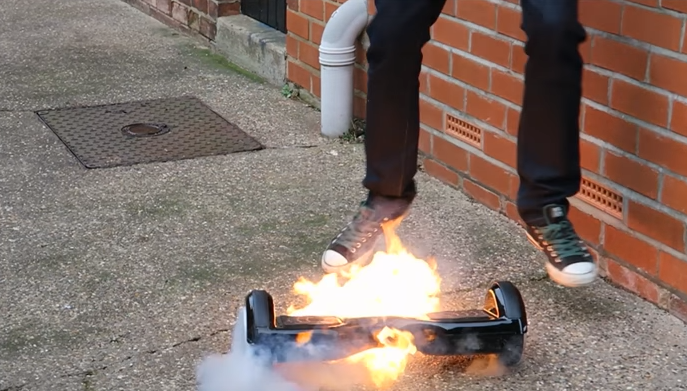 The hoverboard trend seemed to be taking the world by storm towards the end of 2015 until it all went up in flames. Literally…

One by one, people complained of hoverboards spontaneously combusting, and even burning houses down in some situations.

After buying a hoverboard on eBay and charging it overnight, BuleBritish planned to record his first ride on the device, assuming he would fall a few times and would get some funny footage.

Instead, on his first attempt to ride the hoverboard, it goes up in flames in merely seconds.

Most folks are pointing to cheap electronics and exploding lithium ion batteries as the issues in the exploding hoverboards, a result of Chinese manufacturers cranking out as many as possible during the initial hoverboard craze.

Luckily, newer and safer hoverboards that meet certain safety standards are being introduced in 2016, with Swagway’s Swagtron being the device many are excited about.