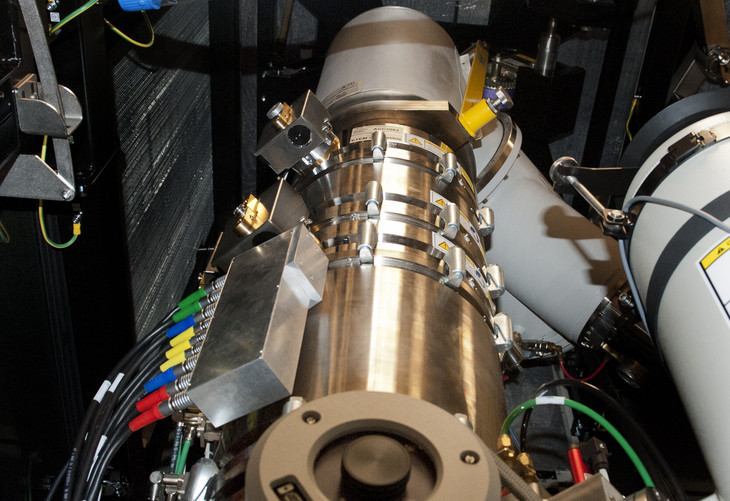 The Titan scanning/transmission electron microscope, also known as the Titan Cubed, is being installed in the Materials Research Institute at the Millenium Science Complex on Penn State’s University Park campus. This leading-edge instrument will greatly enhance the capabilities of researchers in the world of science at the nanoscale. (Image Courtesy www.pennstate.edu)

I recently visited Professor Jeff Lichtman of Harvard’s Molecular and Cellular Biology Center with a small group of journalists, to learn about the Human Connectome Project  which is mapping the human brain and its 85 billion neurons and 10,000 connections per neuron. Scientists believe that “you are your connectome” meaning you are who you are based on the health and characteristics of your body’s smallest constituents.

The Scanning/Transmission Electron Microscopes (S/TEM) needed to map neurons is a double aberration corrected 60-300 kV S/TEM that takes images and chemical characterizations at cutting edge levels of subatomic resolution. This type of advanced microscope is essential to scientific breakthroughs at the nanoscale.

The Structure of Brain Tissue is Unique

The brain is the only system in the body in which scientists are unable to pinpoint the specific cause of illnesses; by mapping the human brain down to the level of individual neurons Lichtman believes we will be able to determine where Alzheimers disease or schizophrenia, for example, come from. According to Lichtman, a pioneer in this new field of “Connectomics” the use of the microscope, which began 300 to 400 years ago, was a major watershed in the understanding of the human body and its systems and tissues. Being able to look at cells allowed scientists to begin to infer what the organs were doing. These days the goal is to map the cells of the cerebral cortex which has thousands of types of cells and requires an electron microscope costing as much as $25 million. Lichtman has calculated that one human brain will produce 1 million petabytes (PB) of information. According to Eric Schmidt of Google, the Internet is roughly 10 million terabytes (TB) or over 10 billion gigabytes (GB) of data. This means Lichtman’s project will produce an amount of data thousands of times larger than the current content of the entire Internet.

Lichtman quipped that he was never so depressed when he realized how big the project was and that he may not see it solved in his lifetime. However he has been working with scientists and engineers in a wide variety of fields and the technology needed to index the human brain is closer and closer every day. Steady advances in computation and imaging have reduced time required from 7,000 years to a few decades and he expects this timeframe to shrink with time.

Beside the electron microscope, Lichtman uses an automated lathe that slices the brain into slivers of tissue just microns thick. The slices are then reassemble and individual neurons are tracked and identified. To say that the brain’s neurons are intertwined like a can of worms is a huge understatement.

The microscope Lichtman now uses sits four stories below ground floor where it sits on the Earth’s bedrock so that small vibrations of cars passing by will not affect the microscope readings.