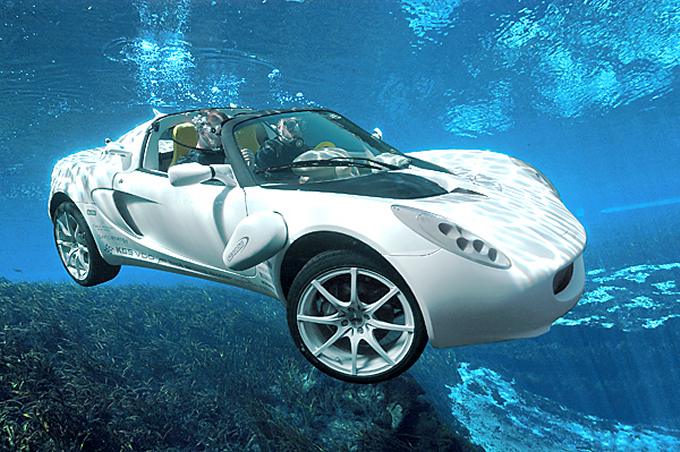 Can’t decide between a drive or a ride on the boat? sQuba combines the two. Photo © Rinspeed

For those who think that a submersible car from a James Bond movie is just a wild idea, Swiss company Rinspeed has launched the submersible car “sQuba” that can be driven on land and underwater.

Inspired by the James Bond film The Spy Who Loved Me, where Bond’s car could plunge into the water to become an airtight submarine, sQuba too can dive up to 10 meters (33 feet) underwater at the push of a button.

The sQuba is a 100% electric vehicle powered by rechargeable lithium-ion batteries. It uses 3 electric motors; one provides propulsion on the land while the remaining two drive twin propellers for underwater propulsion. It also includes a self-contained on-board oxygen system to supply fresh air for breathing.

sQuba has an open cockpit. The car’s two occupants breathe through scuba regulators similar to the ones used by divers. It also has a unique radar system that allows the car to drive autonomously, on the ground or underwater.

The prototype cost more than $1.5 million for Rinspeed to build. The company has already ruled out the mass-production of the car in near future.

IndustryTap previously reported about Tesla’s goal to make its own underwater car. Rinspeed may have submerged the competition initially with its underwater car but it will be interesting to see if other companies can bring an affordable underwater vehicle to market.

Choosing the Safest Car for You