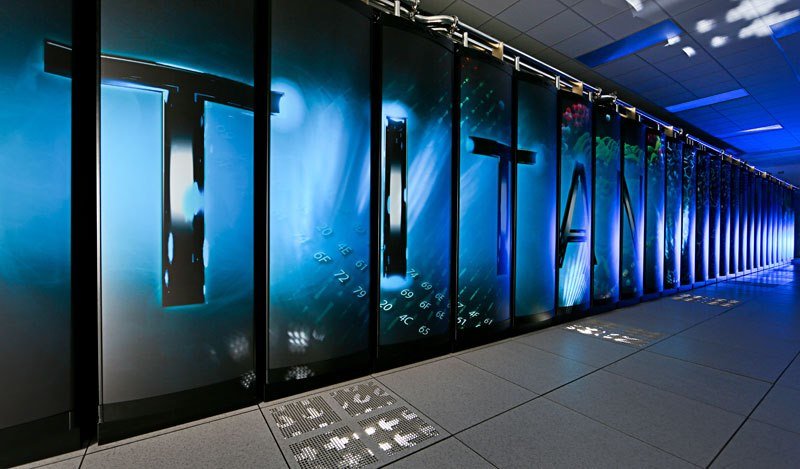 The fastest computers in the world are called “supercomputers” because they allow scientists and engineers to use the most powerful computational technology and tools available to solve the world’s most complex problems. They are also super because they require up to 10 megawatts of power to run, about the same amount of electricity needed to power 10,000 homes. Finally the are super because they can lead to revolutionary discoveries: take the Internal Combustion Engine (ICE) which has been around for a century and a half. According to National Geographic, ICEs lose most of their fuel energy as exhaust heat but supercomputer simulations of new engine designs and technologies are beginning to show ways in which engines could be made super efficient.

The US took back the title of “World’s Fastest Supercomputer” at the end of 2012. The fastest computer was the Titan Supercomputer at the Oak Ridge National Laboratory (ORNL) managed by the US Department of Energy. The same lab had the fastest computer in 2010 called Jaguar.  Titan is a Cray XK7 system containing over 18,000 nodes each built with a 16-core Opteron 6274 processor and a NVIDIA Tesla K20X GPU accelerator making it one of the first major supercomputing systems to use this hybrid configuration. According to ORNL:

The combination of CPUs and GPUs will allow Titan and future systems to overcome power and space limitations inherent in previous generations of high-performance computers.

Because they handle hundreds of calculations simultaneously, GPUs can go through many more than CPUs in a given time. Yet they draw only modestly more electricity. By relying on its 299,008 CPU cores to guide simulations and allowing its Tesla K20 GPUs, which are based on NVIDIA’s next-generation Kepler architecture to do the heavy lifting, Titan will be approximately ten times more powerful than its predecessor, Jaguar, while occupying the same space and drawing essentially the same level of power.

When complete, Titan will have a theoretical peak performance of more than 20 petaflops, or more than 20,000 trillion calculations per second. This will enable researchers across the scientific arena, from materials to climate change to astrophysics, to acquire unparalleled accuracy in their simulations and achieve research breakthroughs more rapidly than ever before.

Companies like Proctor and Gamble and General Electric use supercomputers to solve some of the most complex processes and research.

The website “Top500 Supercomputers” keeps tabs on the world’s fastest supercomputers, publishing rankings semi-annually in June and November. The site keeps statistics on high performance computers such as the number of systems installed, their location, the teams working on them, an overview of how the supercomputers are being used, and more.

The website’s information allows supercomputer engineers and scientists and their sponsors to collaborate when their interests coincide. In November 2012 the United States had 50% of the world’s top 10 fastest supercomputers followed by Germany with two and Japan, China and Italy with one each.

For more information on areas of Supercomputer research visit: